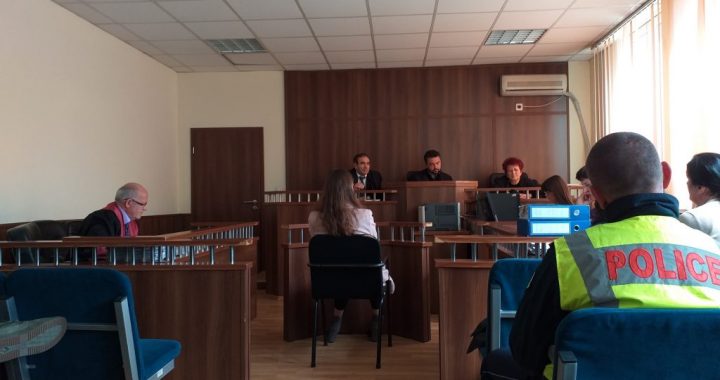 Naser Pajazitaj, who in March was convicted of murdering his cousin Donjeta Pajazitaj in November 2015, lost his appeal on Tuesday and his life sentence in prison was confirmed by the Kosovo Court of Appeal.

The Kosovo Court of Appeal decided to uphold a sentence of life imprisonment for aggravated murder of 24-year-old Donjeta Pajazitaj on Tuesday that was issued to Naser Pajazitaj by the Basic Court in Peja in March this year.

The court held on Tuesday that the defendant’s appeal was “unfounded by law,” explaining that “the verdict of the first instance does not contain essential violations of the provisions of criminal procedure, the factual situation is correctly and fully established and there is no violation of criminal law.”

The Court of Appeal held that life imprisonment was an appropriate decision by the Basic Court of Peja. “The accused’s actions amounted to aggravating circumstances, as the first instance court held, the sentence of life imprisonment was in line with the potential danger to the public it holds and the degree to which it was committed.”

The Basic Court in Peja originally issued the life sentence in March in a retrial that was organized after an appeal was filed by the prosecution in September 2018.

Pajazitaj was originally sentenced in March 2018 to two years and four months in prison for an unlicensed gun charge, and the presiding judge cited insufficient evidence presented by the prosecution that resulted in his acquittal for Pajazitaj’s murder.

A protest was organized by Kosovo Women’s Network, KWN, outside the Prishtina Court of Appeal in September 2018, calling for a retrial of the original decision that acquitted Pajazitaj of murder.

The prosecution’s appeal was brought that same month by prosecutor Valbona Disha-Haxhosaj, who claimed that the court erroneously established the facts in the original judgement by relying on evidence provided by the accused’s wife and daughter.

On retrial, the Basic Court in Peja’s judgement cited “new evidence that was previously absent” which proved that Naser Pajazitaj committed the murder.

The Basic Court in Peja and the Court of Appeal confirmed that in November 2015, while Donjeta was on her way to work, the accused picked Donjeta up in a car on her way to work and killed her, shooting her twice in the head. Pajazitaj was found dead in December 2015 in the mountains near the village of Strellc, Decan, six weeks after she was reported missing by family members.

Naser Pajazitaj was previously sentenced to twenty years in prison for a murder in 1993.

On March 1, the Court of Appeal overturned a decision by the Basic Court in Gjakova and sentenced the ex-husband of Valbona Nrecaj, Pjeter Nrecaj, to life in prison for the murder of her and her daughter in August 2018.

2018 and 2019 have seen a surge in civic protests calling for justice for women across Kosovo, particularly concerning the failure of authorities to properly deal with, or take measures to prevent, murder and violence against women.

In August 2018, protests were held in Prishtina and Gjakova following the murder of Valbona Nrecaj and her daughter, and in March, three billboards were erected by the Haveit Collective in protest of the murders of Diana Kastrati and Zejnepe Bytyci, both of whom were murdered by their husbands in 2015 following multiple calls to the police.

Most recently, in February this year, protests were held across the country in response to allegations of rape that were made against an employee of the Kosovo Police against a minor invovled in a case that he was investigating.