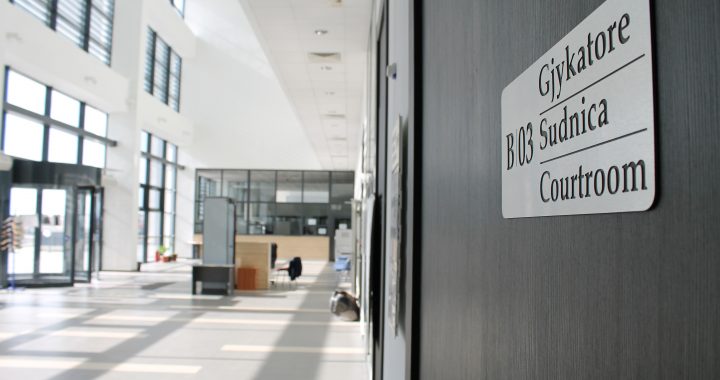 The Court of Appeal on Friday extended the sentence of Pjeter Nrecaj to life imprisonment for shooting and killing his former wife and daughter in August 2018.

The Court of Appeal overturned the decision of the Basic Court of Gjakova of Friday, ruling that Pjeter Nrecaj will serve life in prison for the murder of his former wife, Valbona Nrecaj, and their nine-year-old daughter in the village of Brekoc.

The Basic Court originally sentenced Nrecaj to 24 years in prison in November 2018 for the unlawful possession of a firearm alongside the murders. Nrecaj admitted shooting and killing both victims on August 7, 2018 with an automatic rifle during the Basic Court hearing.

“The imposition of a single sentence of 24 years of imprisonment is not adequate to the extent of the offense and the degree of criminal responsibility of the accused,” reads the press release of the Court of Appeal. “This is because of the very serious consequences of the deprivation of the life of his wife, V.N., and his daughter K.N.”

The Court of Appeal decided that there were additional aggravating circumstances not considered by the Basic Court that fulfilled the requirements for imposing a life sentence.

Both the long history of domestic violence that Valbona Nrecaj was subjected to by the accused, and because the murder was committed in the presence of both Nrecaj’s children and her brothers confirmed this, said the Court.

This case incited multiple protests in August last year against gender-based violence in Kosovo, which also criticized the Kosovo Police’s failure to prevent the murders. Nrecaj sought help by coming to the police station in Gjakova five hours prior to her murder, alerting them that her former husband was sending threatening messages. The police failed to locate Nrecaj before the murders took place.

Following Pjeter Nrecaj’s indictment in September 2018, the Police Inspectorate of Kosovo, IPK, proposed the suspension of three policemen employed at the Police Station in Gjakova as part of an investigation into alleged negligence regarding police action prior to the murders in the case. No decision has yet been issued by IPK regarding the investigation.

Nrecaj received the highest sentence available for murder under the Criminal Code of Kosovo. The parties in this case have the right to appeal the decision of the Court of Appeals in the Supreme Court.

The issuance of a life sentence is noteworthy, considering the series of protests that have been organized denouncing the Kosovo courts’ lenient sentencing for the murders of women and children in Kosovo.

Numerous decisions have shocked the public in the last few years either due to their failure to provide adequate punishment, or the inability to achieve a guilty verdict.

In April 2017, Kosovar activists protested the minimal sentencing for the murder of Zejnepe Berisha, whose husband had stabbed her 20 times. The case was appealed and Nebih Berisha was given a prison sentence of 17 years.

Another protest was organized in September 2018 after Naser Pajazitaj, the cousin of Donjeta Pajazitaj, was acquitted of her murder by the Basic Court in Peja after an appeal which stated that the court had erroneously relied on the testimony of the accused’s wife and daughter to make the decision.

In March 2018, three billboards were erected by the Haveit Collective outside Kosovo Police Headquarters in protest of the murders of Diana Kastrati and Zejnepe Bytyci, both of whom were murdered by their husbands in 2015 following multiple calls to the police.

The billboards were intended to raise awareness on the lack of preventive measures in place to deal with calls of domestic violence, asking “How many more missed calls?”