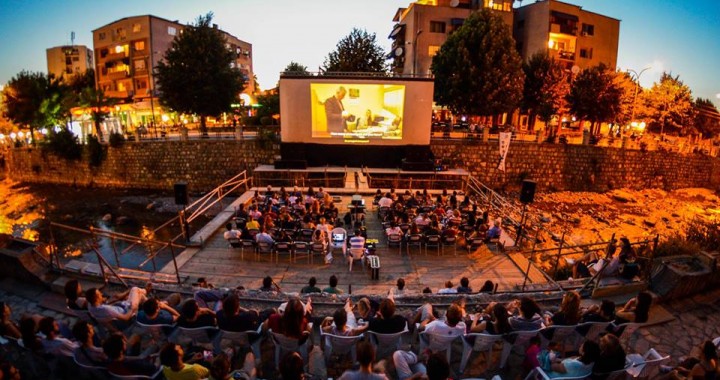 The eighteenth edition of Prizren’s International Documentary Film Festival, Dokufest, begins on Friday, with 280 films being shown alongside artistic exhibitions, special programs and musical events across the next nine days.

This year’s festival will be held from Friday, August 2, until Sunday, August 10, with around 280  films being shown across the historic old town in Prizren, from the cinema atop the medieval fortress, Kalaja, to the screen built on the bed of the Lumbardhi River that runs through the city.

“We are excited to share so many events, starting with numerous film screenings, such as a film about British music icon PJ Harvey, famous Argentinian football player Diego Maradona and films by acclaimed filmmakers such as Pier Paolo Pasolini, Agnes Varda and Patricio Guzman,” said Veton Nurkollari, the festival’s artistic director to Prishtina Insight.

He discussed the inspiration behind the slogan of this year’s festival, ‘Truth Lies Here.’

“The main theme of this year’s festival is truth. Truth is to be found within many of the documentaries playing at our cinemas, but the word ‘lies’ in the slogan has a double meaning. It addresses a growing concern of ours, the fake news phenomena,” said Nurkollari.

According to Nukollari, this year’s theme has greatly influenced the choice of films being screened this year.

“We’re also interested in the cinematographic aspect of both truth and lies and how they interact with each other,” he continued. “This is especially relevant for what is known as ‘hybrid’ forms of filmmaking. We are bringing a number of films to the festival this year that explore this, one of them being Orson Welles’ landmark film F for Fake, for example.”

“We will have the first public screening of the BBC’s documentary Forgiving the Blood, following the mass movement for the forgiveness of blood feuds in the 90’s, which will be followed by a discussion with both the director Melissa Llewelyn Davis and the main researcher Lala Meredith-Vula,” said Deda. Forgiving the Blood will be screened on Wednesday, August 7 at the Lumbardhi River cinema at 20:00.

“We are also excited and proud of the 18 films from young filmmakers that took part in our various educational programs within the DokuLab yearly programme, that will have their premier at our riverbed cinema.”

According to Nurkollari, there are many special programs to watch out for over the nine-day festival.

“There are no less than 16 specially curated programs, organized both by the festival’s programmers and some guest curators,” he said. “One of the highlights will be Fact or Fake: Truth on Film, which features 11 films looking at different aspects of, you guessed it, truth.”

There will also be a tribute program dedicated to four important and radical filmmakers that passed away this year, said Nurkollari. Agnes Varda, Jonas Mekas, Dusan Makavejev and Barbara Hammer’s legacies will be showcased across different cinemas throughout the week in a program named There Is A Light That Never Goes Out: A Tribute to the Radicals.

In keeping with this year’s theme, there is also a special program dedicated to music in film, Truth Will Tear Us Apart, which will screen six feature films including the part-concert part-documentary on the iconic 80’s UK rock band New Order.

A highlight from this program, said Deda, is the screening and live musical accompaniment to the film From the East, which details the voyage of Belgian filmmaker Chantal Akerman from Poland to Moscow shortly after the breakup of the Soviet bloc. The film will be accompanied by a live musical performance from Lebanese electronic musician Rabih Beaini and musician Agona Shporta.

On top of Dokufest’s extensive film program, Deda and the Dokufest team have curated a number of artistic exhibitions, shows and musical events to be held throughout the week.

“I’m excited about our DokuPhoto program, which begins with a holographic exhibition created by Blerta Hocia exploring the main festival theme,” said Deda. She also highlighted Caterina Barbieri’s Live at the Castle, a minimalist polyphonic electronic set exploring “themes related to machine intelligence and object­-oriented perception in sound” playing on Saturday, August 3 at 20:00 at the stage at Prizren’s hilltop fortress.

River Voices will be performing at the Lumbardhi riverbed cinema on Monday, August 5, one of “the last all-female iso-polyphony groups from the Albanian Osumi river region, who will sing songs of its river, love, immigration, history, marriage, children.”

Film screenings will be held across ten different cinemas, said Deda, with some exciting new additions to the festival’s design.

“We’ve added a new super cool cinema this year; the solar-powered traveling cinema called Kino Mahalla, which will be traveling each day of the festival to different neighborhoods around Prizren showing films,” she said.

The festival’s evening music program, Dokunights, will serve an eclectic soundtrack for festival goers this year, ranging from Albanian traditional folk music to contemporary electronic acts across four different stages throughout the week.

One of the most anticipated acts in Dokufest’s musical line-up is a performance from rap artist Bimm Bima, who will be giving the first ever performance of his new album in collaboration with Elinel, Ergen and VLN on Tuesday, August 6 at the Andrra stage.

The lineup includes “house music icon Legowelt, Japan’s DJ Nobu, Jane Fitz, Batu, Coucou Chloe, Josey Rebelle and Perera Elsewhere,” said Deda. The festival will also continue its collaboration with local collectives such as Angry Youth, Bijat, Servis and No Recess, who will be each hosting their own nights at Dokufest’s Andrra stage.