Reports that the Central African Republic is the latest country to withdraw its recognition of Kosovo were met with silence from the Kosovo Government this week, with experts labelling this another setback in a disastrous recent era for Kosovo foreign policy.

Serbia’s Minister of Foreign Affairs, Ivica Dacic, announced last Friday that the Central African Republic has withdrawn its recognition of Kosovo’s statehood, making it the “fourteenth country to clarify its stance on non-recognition.”

Seven days on, there has been no response to the news from the Kosovo Government, nor the Office of the President.

Since Haradinaj’s government took office in September 2017, Kosovo was recognized by only one country, Barbados (a further recognition by Madagascar in November 2017 is alleged by Serbia to have been withdrawn) and suffered a great setback in November 2018 when its third bid to join international police cooperation organization, Interpol, failed.

Kosovo’s current foreign policy strategy prioritizes enhancing the country’s legal subjectivity, promising to attain recognition from the five non-recognizing EU member states, strengthening their relationship with the US and acceding to international organizations.

According to foreign policy experts, Kosovo’s objectives are characterized by a lack of creativity, and the country’s early momentum has been followed by a significant decline in support for Kosovo’s consolidation as a member of the international community.

“We have a political elite currently in power whose software is programmed to fight a resistance war, and play the easy game of liberation,” says Robert Muharremi, professor of international law at the American University of Kosovo, AUK. “That’s one kind of software that we needed. But now, we need a different kind – a constructive, progressive state building agenda – and these people don’t have that.” 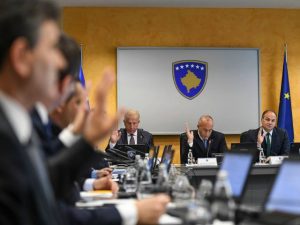 According to Muharremi, Serbia has successfully turned the tide of international support in its own favor as a viable diplomatic partner, and adds that glaring holes in Kosovo’s strategy for consolidating its statehood, both in diplomatic relations abroad and the government’s internal machinery, reveal that support from its international partners can only take Kosovo so far.

A slew of reports from the Serbian Government over the last three years claim that countries, primarily African states and nations in the South Pacific, are withdrawing their recognition of Kosovo’s statehood.

While a number of these states have since confirmed their intention to withdraw recognition, in the cases of Liberia and Guinea-Bissau, their ‘derecognition notes’ were annulled just days after they were communicated.

Despite claims from the Kosovo Government that withdrawal of recognition is impossible in international law, Muharremi stated that the act of recognition – and its revocation – is purely political, and any country is within their right to do so.

However, these withdrawals do not nullify Kosovo’s statehood, he said. “It’s about a country communicating that it wants to have diplomatic relations with another. They want to send the message across that they recognize them as an equal, and that’s more or less it. Does it make a state a state? No.”

Gezim Visoka, assistant professor of peace and conflict studies at Dublin City University, agrees. “The derecognition of states has emerged as a foreign policy instrument for advancing the domestic and international self-interest of the derecognizing states and their international allies,” he said, adding that it is often difficult to verify the authenticity of such diplomatic exchanges. “It remains to be seen if the note of the Central African Republic is official and valid or if it is subject to some sort of manipulation or unauthorized issuance.”

According to Visoka, countries who have allegedly withdrawn recognition of Kosovo, including the Central African Republic, have never justified their decision based on lack of Kosovo’s capacity for statehood. According to the website of the Ministry of Foreign Affairs, Kosovo is currently recognized by 114 countries, although 116 are listed on the Albanian version of the website.

Visoka believes that Serbia’s goal, as it pursues derecognition of Kosovo, is to reduce the number of states that would interact with or would vote for Kosovo in multilateral bodies. “Serbia is seeking to enhance its bargaining power in the EU-led talks with Kosovo,” he added, “either to gain a better deal for Kosovo Serbs living in Kosovo, or to create a fruitful situation for them, where Kosovo would eventually agree to some sort of ethnic-based territorial adjustment.”

Withdrawal of recognitions, freezing of the EU-led talks, ‘border correction’ between Kosovo and Serbia and Kosovo’s imposition of tariffs against goods coming from Serbia have turned Kosovo’s partners against Kosovo, said Visoka, and “offered new grounds to Serbia to be seen as the constructive party whilst Kosovo as the obstructionist one.”

Kosovo’s efforts abroad after the declaration of independence in 2008 were monumental: joining both the International Monetary Fund and the World Bank signaled a positive trajectory towards the consolidation of Kosovo’s place in the international community. 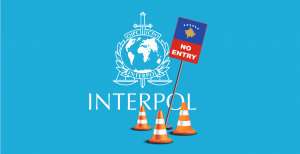 This was bolstered by the International Court of Justice’s 2010 advisory opinion, which confirmed that Kosovo’s unilateral declaration of independence was not in violation of international law.

But as the years went by, recognitions began to decline, with only four UN member states definitively recognizing Kosovo since 2014 (recognitions from UN members Suriname and Madagascar have allegedly been withdrawn, while recognitions from non-UN members the Cook Islands and Niue have also been hailed by the Kosovo Ministry for Foreign Affairs).

Despite successful bids that led to Kosovo’s membership in the International Olympic Committee and international footballing governing bodies, UEFA and FIFA, the state was dealt one of its most significant blows when its bid for UNESCO membership was rejected in September 2015.

According to Muharremi, this is linked to the failure to maintain one-on-one relations with nations that, early on, expressed support for Kosovo’s sovereignty.

Poland, which was one of the first countries to recognize Kosovo in 2008, played a pivotal role in Kosovo’s failure to achieve membership in UNESCO in 2015. Poland was one of three countries recognizing Kosovo (alongside Japan and South Korea) that abstained from participating in the voting process, which failed by exactly three votes.

“We have lost so many votes because we haven’t cared about our partners bilaterally – if you’re recognized by Poland, why would you not even bother to establish an embassy there?” said Muharremi. “International politics and diplomacy is about mutual respect.”

Efforts to establish diplomatic relations with non-recognizing states in Europe have also been lacking. In September 2014, when President Hashim Thaci was prime minister, he promised that Kosovo would open an Office for Economic Affairs in Athens, but this pledge never became a reality.

According to Muharremi, the moment that recognitions began to slow down signaled that responsibility for maintaining diplomatic relations, and establishing new ones, lay solely with the Kosovo Government. Relying on its friendship with the United States, he said, was no longer a viable option.

Kosovo’s lack of initiative has boosted Serbia’s political position significantly. “Serbia is showing how many countries internationally have lost confidence in Kosovo, that these countries have realized it was a mistake to recognize Kosovo and therefore Kosovo is not a state,” said Muharremi. “From Serbia’s perspective, we are doing exactly the right thing.”

Kosovo is doing nothing to counteract these efforts, he added. Referencing Ramush Haradinaj’s claim at the beginning of his mandate that Kosovo’s foreign policy is led by the United States, Muharremi sees no change of strategy whatsoever. “I just see a continuation of the same objectives, they hit their head against the same wall time and time again,” the professor stated. 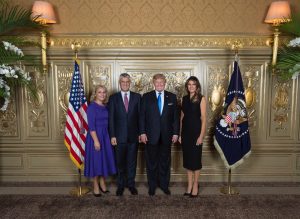 Kosovo President Thaci and First Lady were received by the US Presidential couple. | Photo: courtesy of the President’s Office.

Visoka, however, points to Kosovo’s successes in establishing bilateral relations and maintaining relationships with countries that have already recognized Kosovo.

Last week, Kosovo successfully established such diplomatic relations with Antigua and Barbuda, establishing a framework for bilateral relations and a non-resident ambassador.

“Kosovo has more diplomatic relations – over 80 – signed than a good number of UN members,” Visoka said. “However, these countries are in a much stronger position than Kosovo in multilateral affairs.”

Focus on joining multilateral political organizations has been at the core of what is wrong with Kosovo’s foreign policy strategy, believes Muharremi, which has made it easy for Serbia to focus their diplomatic resources on delegitimizing Kosovo in the eyes of voting states.

Alongside Interpol and UNESCO, former Minister of Foreign Affairs Enver Hoxhaj pledged back in 2017 that Kosovo would be a member of the Council of Europe by January 2018. However, no bid for membership ever materialized.

“Why do they fight these uphill battles when there is so much low hanging fruit? You can cement your statehood internationally with much less effort,” said Muharremi. “You tried it once, you figured out you can’t win, you should change your strategy. Instead, we’re hitting a wall again and again and again without changing strategy and Serbia knows that is all we’re doing.”

Changing of the guard

Transformation of both the leadership and organization of Kosovo’s foreign service is fundamental to progress in international relations, said Muharremi.

“You need to have a minister who is focused on foreign policy, and not on doing business,” the professor stated, referencing Kosovo’s Minister of Foreign Affairs Behgjet Pacolli’s entrepreneurial past. “You need a cabinet full of professionals who have ideas, and then you need to trickle it down into the entire foreign service, and this is lacking.”

Hopes for a new generation of Kosovo politicians working towards change are unlikely to materialize, he believes.

“Normally, a country would make this gradual generational shift, but these people are holding on to power so tightly that they don’t allow fresh blood to come into politics,” he said. “Even those who do are socialized into being a clone. The filtering process is done through self-recruitment by the elites themselves.”

According to Muharremi, those most likely to make positive changes to Kosovo’s foreign service are becoming frustrated, indifferent or, worst case scenario, have left the country.

“You need to show that you are responsible, professional and that you respect your bilateral partners, and actually nurture this communication,” he concluded. “The foreign service is the key to that success, and that’s why it’s not working.”