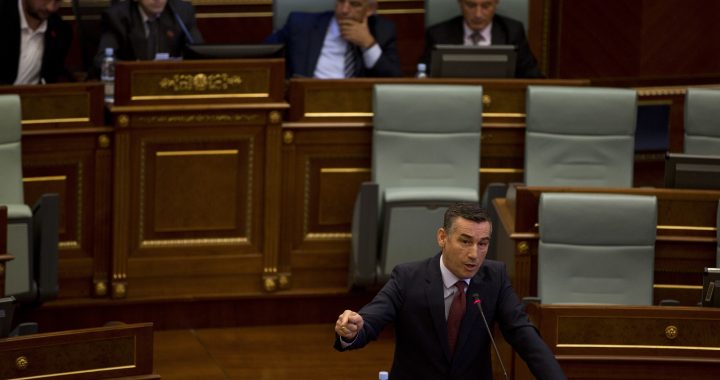 Kosovo lawmaker Kadri Veseli, candidate for parliament speaker, reacts during the parliamentary session as the nomination of Kosovo's new prime minister has been delayed after the winners of the June 11 election failed to gather enough votes to elect the new parliament speaker in capital Pristina on Thursday, Aug. 24, 2017. | Photo: AP Photo/Visar Kryeziu, Beta

Functioning in a dysfunctional society

We are on the verge of forming Kosovo’s new government, and things still resemble the postwar period: politicians come into power as a way to extort and loot the state and its citizens.

I grew up during a time when a free society and the democratic state were deeply idealized. I started school before the Kosovo war began, a chaotic situation in which I, as a seven-year-old child, did not have the ability to understand what was really happening around me. But what I did learn was that we were living in an occupied society, and that we should keep hoping that one day everything would change and we would live in a free and autonomous country.

Every day before the lessons began, my first elementary school teacher would tell us that we are the generation that would one day live in freedom and that we would have to be mindful, to have great love necessary to build this country.

Our daily classes consisted of Albanian language, mathematics, and natural sciences. Art classes and physical education were considered ‘luxuries,’ and teachers considered them to be a waste of time. We were on a mission: one day we could run a state; music and drawing would not take us anywhere!

Several times before schools started, we would go in front of the national theater to protest against injustices. We would shout “Freedom! Kosovo! Republic!” When we came back from the protests, as the innocent children that we were, we would ask our teachers what republic meant, and why Kosovo should be a republic.

The teacher would explain to us that a republic is a form of government in which the country is not the private concern or the property of rulers, but where the politicians are elected by the people and are supposed to represent the people’s will. She would say that in a republic, all citizens were treated equally, and that in a republic, politicians have to obey a set of rules that were decided by the people, written down in a constitution, and voted on by the public.

At the time, notions of elections, the constitution, politicians, and even government sounded so abstract to us – we just couldn’t comprehend them. Yet we knew what occupied, conquered, submission, and dependence meant; those weren’t abstract concepts, those were our everyday lives.

When I think back to that period, the period of the Kosovo’s parallel systems, it seems to me that we were living by improvising: improvising education, the health system, life in general.

When the war ended, when we broke free from a repressive regime, the chance to build our own ‘republic’ emerged, along with the opportunity to have a free and democratic government.

Today, 17 years later, you don’t need a master’s degree in divination to see that where we are standing, and wherever this country is headed, is not any place good.

We are on the verge of forming the new government and things have not changed much since the postwar period. The same people continue to be the members of parliament- the same faces have been elected even this time to be part of the sixth legislature. A considerable portion of the politicians from the political scene over the years have tried to remain in power at all costs, without sparing us from crime and corruption, or from nepotism and militancy – the only way they know how to operate best.

Since the first legislature, the struggle for absolute control has epitomized the Kosovo political class. Our politicians have never aimed to get to power to serve the citizens and the legal state – something that should happen in a civil and democratic state- but rather all the struggle is done to have the control over the state. The goal is to serve their clientele, clans and businesses which are incriminated and always serve as infusion for the over-corrupt and criminal politicians.

We have created a political class that is of the opinion that coming into power is a way to extort and loot the state and its citizens. Politicians enrich and employ their family, clan, and militant circles, but do not become worthy servants for the disadvantaged citizen.

During every election, we hope that the political moment has come for the political class to fundamentally change their way of thinking and doing politics, and to establish the rule-of-law and think about our future.

Since 2005, Vetevendosje has set itself up as the voice of the autonomous, and of social and economic justice, by opposing the uncontrolled privatization of public enterprises, economic stagnation, the Brussels-facilitated negotiations between Prishtina and Belgrade. That’s why Vetevedosje, who became the symbol of opposition to the status quo that we had with our past government, has won more seats in these parliamentary elections than any other political party. The majority of Vetevendosje’s voters were young people who wanted to see some policy changes, but most importantly, didn’t want to see PDK in government anymore.

I guess it’s faith for a better future — one where institutions of governance respond to people’s demands, jobs are abundant, and merit prevails at all costs. But once elections are over, it’s déjà vu all over again. Nothing changes except power relations between political elites.

We continue to improvise our life, functioning at the dysfunctional level. Every institution, from academic to religious, is highly politicized. The three mainstream political parties, PDK, LDK and AAK, are equally responsible for it. Even for contractual jobs in public institutions, our universities, colleges and other academic and professional institutions, some kind of political backing is a must.

We are far from being the republic that my elementary school teacher spoke about and perhaps far from being the generation that will relish this country. Possibly our children will be the generation who will understand what this state could be if you work with dignity and principles. A generation who would not know how to be subjected – who understands that to build a state and a healthy society is the greatest political and spiritual wealth.

After all, I wish we wouldn’t have had to skip our music, drawing and physical education classes. Who knows, perhaps they would have been much more useful today, by strengthening our problem solving and critical thinking skills.

Tanita Zhubi is an MA graduate in international relations at Aarhus University in Denmark.