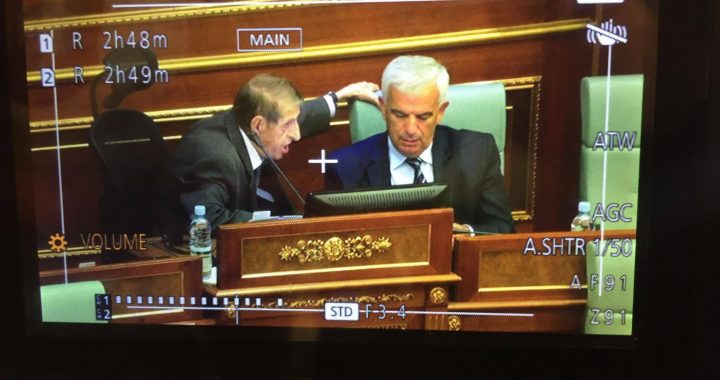 Although PAN coalition MPs returned to the Assembly today, without the necessary 61 votes to elect the speaker, the session was once again postponed indefinitely.

For the sixth time in a row, the elected MPs gathered to continue the constitutive Assembly session and attempted to elect the speaker.

The PAN coalition, which has been boycotting the sessions since August 3, returned to the Assembly hall only to inform the elected MPs that they did not yet have the necessary votes.

Taking the floor first, Enver Hoxhaj, former Foreign Minister and PAN representative, said that the coalition, composed of the Democratic Party of Kosovo, PDK, the Alliance for the Future of Kosovo, AAK, and NISMA, needed more time to gather the required votes to elect their candidate.

“We are interested in implementing the election results, and in no way do we want to lose time or drag the process out,” Hoxhaj said. “My message to the Kosovo people is that we need more time.”

Shrugging his shoulders, Hoxhaj admitted that they did not have necessary 61 votes. The room exploded in a guffaw.

Hoxhaj asked for a “less than two week” extension.

As the winning political subject in the June 11 elections, the PAN coalition has the exclusive right to propose a candidate for Speaker of the Assembly according to a 2014 Constitutional Court decision. However, a vote on August 3 about a PAN-proposed break indicated clearly that the Assembly was stuck in a tie, with no single party or coalition having the necessary votes to elect the Speaker and the new government.

The deadlock has been met with criticism by the diplomatic corps, who have urged all parties to participate in the Assembly and allow for the new legislature’s work to begin.

Accusing PAN of damaging Kosovo’s economy through the stalemate, Kurti said that PAN were “denying the vote of the citizens.”

“Kosovo and its citizens are losing a lot. PDK is not showing interest to consummate its right to propose its candidates. If PAN continues to boycott the session, we should have our own proposal,” said Kurti, after urging Veseli to run as the candidate and see if he had the votes.

“The situation is being monopolized just so that two individuals can try every possible path to achieve their goals,” said Hoti. “Today, the country is finally entering a deep institutional crisis.”

Hoti proposed to curb all sessions and instead invited all parties to a political dialogue.

“We haven’t even started our mandate, and the Assembly has entered into a bargain mode,” he said.

Taking the floor, Veseli made a passionate speech, accusing Vetevendosje of attacking the parliament with explosives and inciting hatred with Albanian flags. “What if the Srpska Lista put up Serbian flags?” he demanded.

“The current political situation is 60 votes. Whichever side manages to get 61 votes, will form the Kosovo institutions,” Veseli said. “When Albin Kurti has 61 votes, I personally, as PAN leader, will sign on to him becoming Speaker of the Assembly.”

Although Assembly session leader Adem Mikullovci kept insisting that the floor was not to be used for political debate, Kurti replied to Veseli’s statements, urging him once more to put his name up for a vote as Assembly Speaker.

In a final response, Veseli accused Vetevendosje of being “Kosovo’s plague”  and said “let’s not go crazy for seats.”

Mikullovci closed the session without setting the date for the next meeting.