Highway to contemporary art in Prizren

Known for its cultural heritage, a jovial tourist scene, and the famed Dokufest, Prizren has also become the first city in Kosovo to host an art biennale.

Autostrada Biennale, a major contemporary art event, which began last Saturday and will run through September 23, will host over a dozen local and international artists and a series of panels and workshops.

Founded by Leutrim Fishekqiu, Fitore Isufi-Koja, Baris Karamuco, and Vatra Abrashi, the biennale was conceived as a way to connect the local art scene to an international network of artists and curators. It was also meant to be a cultural highway connecting the two major art biennales held in Venice and Istanbul.

“Although there is an actual theme, for the first edition, we focused on emphasizing the highway aspect of Autostrada Biennale,” explained the biennale’s lead designer Berin Hasi, alluding to the event’s name, which from Albanian translates literally into Highway Biennale.

Meanwhile, this year’s theme, conceptualized by chief curator Manray Hsu, titled “The Future of Borders,” also deals with mobility or obstacles to it.

”The theme ‘The Future of Borders’ was chosen for the first edition to boldly address notions of visible and invisible borders and to convey the message of necessity to form a more livable collectivity,” Hsu wrote in his concept note. Hsu, who joined the Biennale last December, is an independent curator and art critic based in Taipei, and co-founder and the former director of Taipei Contemporary Art Center.

The artworks exhibited, the live performances, and even the exhibit locations themselves each address the main theme.

For example, a banner proclaiming “Your Country Does Not Exist,” in English and in Albanian, sits proudly atop the small bus station, which has been temporarily turned into an exhibition space. 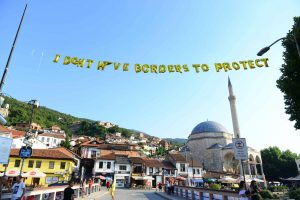 Meanwhile, walking around the city one can find diverse artworks related to the city life, its history and cultural diversity. Across the Lumbardhi River, in the Marash area, around the hillsides and the Fortress, one can find works tackling ruins, and the dichotomy between human and natural environments.

“The works are questioning the public. We aren’t dealing with the answer. This is the connection between contemporary art and our society,” explained Fishekqiu.

Sislej Xhafa, a famed Kosovo-born artist and board member of the Biennale, will be presenting in one of the panels.

Aiming to bring art closer to ordinary people, the Biennale will also feature exhibitions inside historic family houses in Prizren, which will turn into temporary galleries during the five weeks of the event.

Residents are volunteering their private spaces to be used for artistic purposes, with some even accepting to turn the first floor of their houses into an exhibition space.

The importance of converting private homes into galleries plays a twofold role, as this is also a method for promoting cultural heritage. From the outset, Autostrada Biennale cooperated with Cultural Heritage without Borders, CHwB, in installing the artworks, and is planning workshops to be held in the coming weeks.

Another important element of the Biennale is its so-called educational program, which will begin in September, as the new school year begins.

“The educational program of Autostrada Biennale will be held for three weeks. We will hold different tours for various schools, workshops, lectures, and panels, which will group young critics of Prizren, in order to discuss the artworks, share their perspectives and critique. There will also be discussions open to the public,” Abrashi, one of the founders, explained.

“The idea is to see their point of view, but also their critique for each art piece,” she added.

On the Biennale’s own branded bus, students and teachers from rural and other urban areas will have the opportunity to visit the artworks and discuss them, as an alternative school hour. Abrashi hopes this will make for a more interactive lesson, instead of the more traditional (read: boring) take on art classes.

“With Autostrada Biennale, the city becomes a factory, an experiment, a curiosity,” Xhafa said. “The most important thing about this biennale is that it is not exclusive, but inclusive. That means that art is coming to the people, and people coming to art, without having to be an artist or someone in the field of art.”

Autostrada Biennale will run between August 19 and September 23.