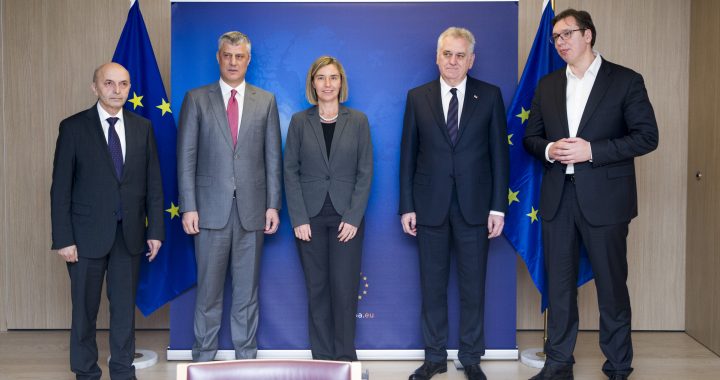 A gag order on a high level meeting between Kosovo and Serbia leaders will only leave things open for (mis)interpretation by the fed-up local publics.

On Tuesday evening anyone who cares about relations between Serbia and Kosovo waited with bated breath to find out what would be the outcome of the unprecedented SuperTuesday meeting — including both presidents and prime ministers — of Kosovo and Serbia. It was more or less expected that they would reconfirm their “commitment” to the dialogue and not much else. Or, as Koha Ditore editor Agron Bajrami put it in a pithy tweet, “They create tensions, then they get lauded for reducing them!”

The meeting was supposed to reduce tensions after a new (Russian) train, emblazoned with the Serbian tricolor with a collage of the old standby, “Kosovo is Serbia,” in 21 languages on the outside and printouts of icons from some of the exquisite Medieval Orthodox Serb monasteries in Kosovo, was halted en route from Belgrade to northern Mitrovica.

Let’s leave aside the fact that this train had been announced on news sites and on Twitter at least days, if not weeks, before the train set off on its unsuccessful maiden voyage, and therefore could have been stopped, saving its passengers an evening in Raska (which is actually not a bad place to see actual monasteries, instead of just their reproductions in train cars).

So the leaders — all four of them — who could have prevented this heightened tension and all the trappings of war rhetoric that came with it, but didn’t, were summoned immediately to Brussels to find a way out of the morass.

After a dinner in which the only video released showed the EU High Representative cajoling all parties into a photo opportunity, the EU released a statement saying that the parties had “Agreed to take the Dialogue forward in a spirit of respect, cooperation and mutual understanding.”

Both sides came back to their capitals to publics hungry to find out who had emerged victorious.

Thaci apparently told media assembled after the dinner that the talks are helping Serbia understand that Kosovo is an independent country.

Vucic fired back on Wednesday morning, telling Politico, “They don’t do anything in accordance with the things that we agreed upon.”

EU spokesperson Maja Kocijancic made a statement that seemed to politely castigate President Thaci for comments he made upon his return to Prishtina.

“…An essential outcome was to leave tensions behind and to refrain from commenting in public on the discussions. We regret that this has not been complied with by all, and invite to exercise restraint and build on the agreement reached yesterday.” (Emphasis added.)

But if the leaders are not supposed to make statements about the meetings, we can only conclude that Brussels wanted them to apply the age-old adage: “If you don’t have anything nice to say, don’t say anything at all.”

I have followed the intricacies of the Kosovo-Serbia dialogue as a journalist for years now and appreciate the host of complex issues being discussed in Brussels, down to the nitty gritty details which don’t often get enough press, and respect the very concrete things that have been accomplished in six years as a result of so-called ‘constructive ambiguity,’ financial incentives, elbow grease, and just plain pressure. However, I have a hard time reading, and re-reading, any statement that says that after six years of negotiations, the leaders party to them are supposed to “refrain from commenting in public on the discussions.”

Citizens of Kosovo and Serbia are riled up due to the tensions fomented in part by the people who were flown in to Brussels for dinner. Especially considering the fact that the reason the leaders are there is because their publics elected them as representatives.

It is obvious that, as the EU recommends, the leaders should refrain from misrepresenting the discussions, fomenting violence, nationalism, et cetera: leaders should be responsible.

But to expect that people fly to ‘the meeting we’ve all been waiting for’ and then to say nothing other than that they remain committed to the dialogue indicates the extent to which the so-called Brussels Dialogue seems to have become a process for its own sake.

Clearly part of the problem is that Brussels, Belgrade and Prishtina seem to think that their publics need to be coddled. That means hearing constant reaffirmations that “Kosovo is Serbia” — in 21 languages, no less! Or in Kosovo, empty threats to apply ‘reciprocal measure’ to Serbia, even regarding state recognition. Meanwhile in Brussels, the mantra is apparently that there needs to be a lid on it.

But domestically, there is an appetite to tackle the problems between Kosovo and Serbia: A new study by the Belgrade Center for Security Policy shows that three quarters of Serbian citizens support the continuation of the dialogue. Two thirds support a dialogue that improves the rights of Serbs in Kosovo and stability in the region, and a full one third believe the dialogue should be held regardless of EU pressure so as not to leave unresolved questions to future generations.

In Kosovo, the opposition is vocally opposed to the dialogue chiefly because of the Association, but even Vetevendosje agrees that some form of dialogue with the Kosovo Serbs needs to exist.

A gag order on what is talked about in Brussels in important ‘high level meetings’ is bound to be troublesome because it leaves so many things unresolved and open to interpretation for those on the ground. And if it continues in this way, whatever happens in Brussels, whether it be commitments, mutual understanding, or a vision for a better future… will truly stay in Brussels.