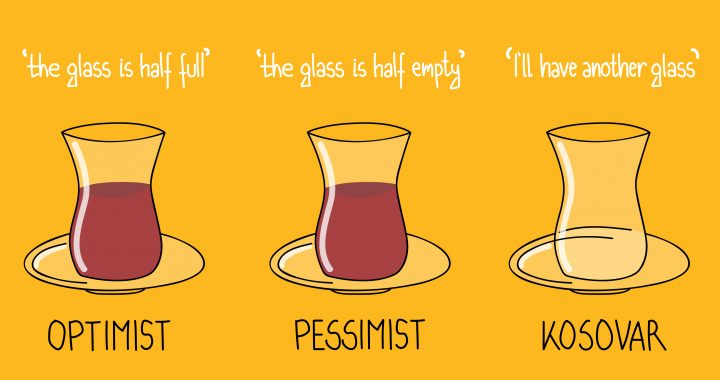 Happy with being badly educated, poor and isolated

Misguided optimism and accepting Kosovo’s faults in education, health and governance as fate will not resolve the deep-seated issues.

Recent PISA results demonstrating the proficiency of Kosovar students once again confirmed the desperate situation in Kosovo schools, with the performance of Kosovo’s 15-year-olds ranking 77th out of the 79 countries and regions that undertook the PISA test in 2018.

Even more worrying than the result itself is the belief of Kosovar students that, in terms of their intelligence, a change is not likely to happen. According to the PISA report, 72 per cent of Kosovar students lack a “developing mindset” and agree that “intelligence is something you do not have the power to improve.”

In short, Kosovar students believe that their level of intelligence is determined at birth and neither the school, nor them, can do anything about it.

Despite the state of affairs within the education system, 82 per cent of Kosovar students also revealed being satisfied with their lives, far more than the average of students from the OECD countries or even the most developed countries in the world.

However, high reported levels of both happiness and optimism are not only a peculiarity of Kosovar students, but of the entire society.

For many years Kosovo topped the list of the most optimistic countries in the world, according to Gallup International research. Even in the World Happiness Report for 2019, Kosovo ranks at 46, well above any other country in the region.

Kosovars are also optimistic that their country will join the European Union sooner than any other country in the region, even though Kosovo is furthest back in the accession process. According to a 2019 poll, 33 per cent of Kosovars are of the opinion that Kosovo will become part of the EU by 2020, though 2020 is now only days away and Kosovars are still restricted from visa-free travel to the Schengen area.

Annual data provided by Regional Cooperation Council (RCC) also depicts Kosovo as the most optimistic country in the region. Data from the RCC 2019 survey shows that 39 per cent of Kosovars are optimistic that the economic situation will be improved in the next 12 months, while 41 per cent of respondents are satisfied with the financial situation in their families, though in reality Kosovo’s economy lags behind others in the region.

According to the same survey, Kosovars are also more satisfied with their health care system than citizens in North Macedonia, though a large number of Kosovo residents travel to Skopje for health care procedures and physical examinations. Kosovars are also more satisfied with the education system compared to the citizens of Albania, though the Albanian system is performing at a higher standard and improving at a greater rate according to all measurements.

Kosovo maintains the highest unemployment rate in Europe. It has amongst the highest levels of air pollution and premature deaths caused by pollution on the continent. It is the most isolated country in Europe with impoverished health care and education systems. It has the largest number of participants in the war in Syria per capita. Yet it is also one of the happiest and most optimistic countries.

Does this mean that optimism and happiness are related to ignorance: the more ignorant, the happier and more optimistic? In a global study of happiness and optimism, researchers were surprised by the high levels of optimism among the poorest people in Africa and Afghanistan.

According to Carol Graham, author of the book Happiness around the World – The Paradox of Happy Peasants and Miserable Millionaires, the explanation for the high optimism among the poor population can be found within cultural, religious and psychological reasons.

Graham writes that the efforts required for survival may also be part of the reason for high optimism: Individuals with deplorable conditions need to be optimistic in order to survive. Perhaps, the condition of these individuals is so severe that they are aware that the future may not be better, but there is nowhere else to go. The rich on the other hand, aware that their conditions are good enough, naturally fear that their children may not have the opportunities they had.

In Kosovo, the unacceptable situation in the education sector has been caused by wrongdoers who have to be held accountable – specifically political parties that have seen the education system as an opportunity to employ family members and party militants rather than as institutions of education. The isolation of Kosovo’s citizens is not a fate to be accepted: It is a result of a criminal policies.

Similarly, air pollution is not a punishment by nature. It is the result of destructive policies that allow unrestricted burning of coal, logging, the destruction of rivers and the importation of polluting vehicles without any prior inspection.

Nevertheless, whatever the reasons for Kosovars’ ungrounded optimism, a mentality where poverty, illiteracy, pollution, mismanagement and other social problems are justified with an ‘as it is written’ philosophy gives no hope for social recovery. This can only happen through demanding better conditions in education, health, the economy and governance. This ungrounded optimism may be good for the mental health of individuals, but it is paralyzing for the well-being of society.