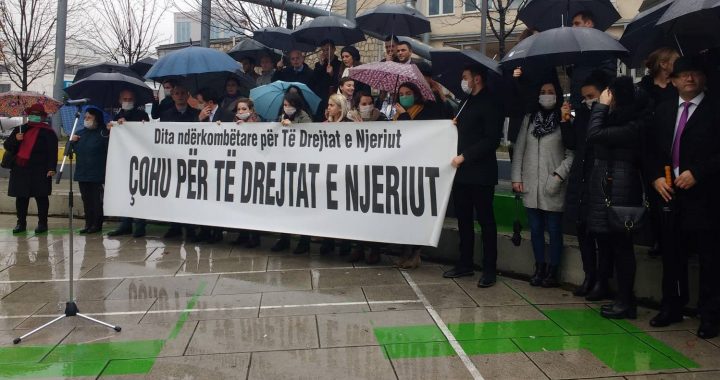 Protesters stand up for environmental rights

Marking International Human Rights Day, a march across Prishtina was organized on Tuesday, raising awareness of the need for Kosovo institutions to improve human rights protections related to a safe and healthy environment.

Under a banner reading “Stand Up for Human Rights,” demonstrators supporting the right for a clean and healthy environment in Kosovo joined a march in Prishtina organized by civil society organizations and the Kosovo Ombudsperson Institution.

The march began outside the Kosovo Government building at Skenderbeu Square on Tuesday, and continued towards Zahir Pajaziti Square in the center of Prishtina.

According to the Ombudsperson Institution, the march aims to send a strong message in favor of inclusive and inter-institutional engagement concerning the promotion and protection of human rights, particularly the right to enjoy a healthy environment.

BIRN Kosovo’s Executive Director, Jeta Xharra, addressed protesters, criticizing in particular the proliferation of air pollution across Kosovo. “To breathe without fearing that you might die is a fundamental right,” she said. “Kosovars live 10 years less than those in Europe and this is mostly caused by the polluted air we have.”

Kosovo has been suffering from high levels of airborne pollutants caused primarily by the operation of the outdated Kosova A and Kosova B coal-fired power plants just 10 kilometers outside the capital.

Xharra also criticized the damage to rivers across Kosovo, which has been caused by the construction of hydropower electricity plants, which cause harm to the rivers’ ecosystems and deplete Kosovo’s already scarce water resources, leaving many rural villages across the country with no water.

“There is no more fundamental a right that having drinkable water, non-contaminated food and fresh air,” she continued.

Kosovo Ombudsperson Hilmi Jashari also addressed the demonstrators, noting air pollution, river damage and issues related to deforestation as causes for concern for people in Kosovo. “The prosecution and the courts are nor giving priority to any cases that are related to the environment,” he said.

“Kosovo’s central institutions have not yet joined the global initiative to take serious action related to access to drinkable water, access to sewers, access to sustainable, modern energy for all and making our cities habitable for people,” he concluded, urging public institutions to tackle issues related to the health of Kosovo residents head on. Jashari promised that the Ombudsperson Institution will address these objectives in the coming year and continue to be vocal on human rights related to the environment.