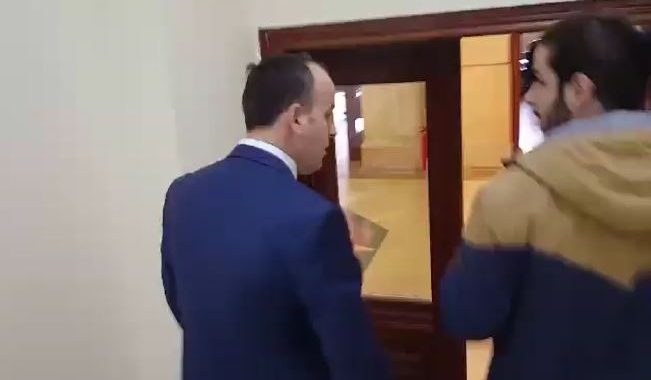 Taulant Osmani, a KALLXO.com reporter, was kicked out of the Kosovo Assembly building while covering a special session on demarcation.

Osmani, a reporter for Prishtina Insight’s sister-publication KALLXO.com, was forced out of the building around 1:00 pm while MPs, guests and journalists were waiting for the extraordinary session on the demarcation deal with Montenegro to commence. The session was later postponed for Friday morning.

Osmani was taken out of the building after Assembly security personnel found him waiting in the corridor where Assembly Speaker Kadri Veseli’s office is located. Osmani, who is an accredited reporter for the Kosovo Assembly, was waiting on MPs to come out of Veseli’s office from a private meeting.

Osmani said that as he was forced out, the guard justified his act by claiming that he was not accredited to cover Assembly events since his pass expired on December 31, 2017.

However, all journalists currently covering the Assembly do not have valid passes, as the Kosovo Assembly has not yet distributed accreditation passes to journalists for 2018.

Following the incident, the editorial team of KALLXO.com issued a statement demanding swift measures to allow journalists to do their job.

“KALLXO.com requests the Assembly Secretariat to take measures so that journalists can carry out their jobs unimpeded and to initiate measures against the official that obstructed Osmani,” the editorial statement reads.