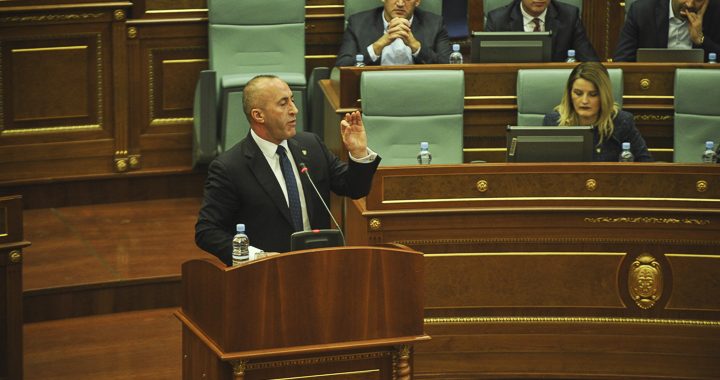 Crisis deepens over demarcation as Haradinaj chides LDK in parliament

The Government of Kosovo fails to gather enough votes to ratify the border deal with Montenegro, forcing parliament to continue the session next Wednesday at 10 am.

In a familiar turn of events, the Kosovo Assembly presidency agreed once again to postpone the extraordinary session on the border demarcation agreement with Montenegro for next Wednesday. The session will coincide with the visit of European Commision President Jean-Claude Juncker.

Prime Minister Ramush Haradinaj, who had opposed the 2015 deal with Montenegro, claiming that it would cause Kosovo to lose territory, presented the Assembly with the same draft bill, but with an additional commision report and an annex-agreement signed by Montenegrin and Kosovar presidents last week.

The Democratic League of Kosovo, LDK, are against having the draft law attached to the new commission report, as it is directly contradictory to the original report on which the agreement was based.

Soon after 93 MPs filed into the Assembly room, it was clear that rumors that a deal had been reached Thursday night after yesterday’s failure to even begin the session were false.

Assembly Speaker Kadri Veseli reminded everyone about the high stakes, explaining that Kosovo’s visa liberalization regime for the Schengen countries depends on ratification of the deal. Border demarcation with Montenegro and the fight against corruption are the two remaining criteria to be fulfilled in order for Kosovo to get a visa-free regime with the EU.

A visibly impatient Ramush Haradinaj took the floor and yelled at LDK MPs.

“We have been divided for the past two and a half years over our country’s territory,” Haradinaj boomed.  He also chided LDK for opposing the new commission report.

“The government of the taxpayers created a commission that has delivered these findings. You should be ashamed, ashamed, ashamed. Why is this report bothering you? Where does it hurt you, oh men and women? Tell us.”

Tension built up in the room as Haradinaj reached a higher register.

“You’re prepared to give away land. As long as I am here this won’t happen,” Haradinaj said.

Avdullah  Hoti, LDK’s parliamentary group head, took the floor to express his disbelief at the manner in which the MPs were being addressed.

In an attempt to reach consensus, a short break was proposed during which all parliamentary group heads, with the exception of Vetevendosje, met.

Upon returning a half an hour later, it became evident immediately that a consensus was not reached, and that the session would be postponed once again.

Hoti repeated that LDk would only vote for the 2015 agreement accompanied by the joint statement of the two presidents.

“We support all reports of commissions to be used as an orientation,” Hoti said, adding wryly that the session should be postponed “until a consensus was reached.”

LDK MPs also insisted that PM Haradinaj be present in the next session, and due to his previously planned travels for next Monday, the session was rescheduled for Wednesday at 10:00 am.

The Kosovo Assembly will also be receiving EC President Juncker on Wednesday during his Western Balkans tour, during which he will be discussing the Commission’s new enlargement strategy.