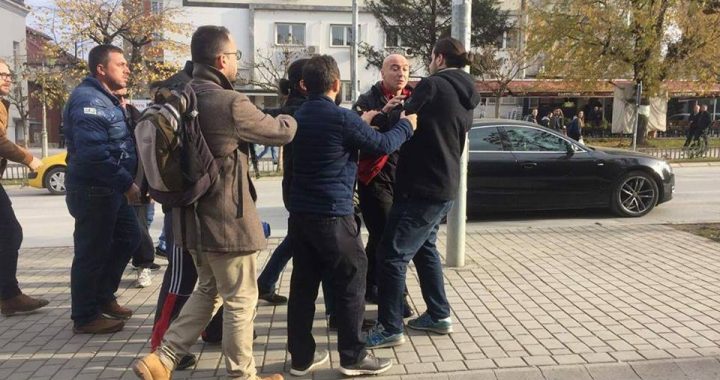 Journalist Taulant Osmani was threatened with physical attack and verbally abused on Saturday at a protest against the relocation of a monument dedicated to the fallen of the 1941-1945 Anti-Fascist War.

Kallxo.com journalist Taulant Osmani was threatened with physical attack and was verbally abused at a protest against the relocation of a Yugoslav-era monument in Gjilan.

Osmani was covering the protest, following his earlier reporting on the tense debate between Gjilan’s residents, governance, and civil society regarding the monument’s relocation. A statue of early-twentieth-century Albanian military leader Idriz Seferi is being erected in its original place.

The relocation of the monument has been a controversial topic for Gjilan residents, some of whom decided to protest on Saturday and lobby for the monument’s return to its original place.

Journalist Osmani said that he was filming a heated discussion between people who were debating the differing sides when one of the discussants asked him why was he filming, while two others tried to attack him and take his phone.

“To portray how polarized citizens are regarding this issue, as a journalist I started filming their debate. The person reacted aggressively with words, he verbally attacked me asking why I’m filming. In that moment, two other individuals intervened by shoving me, cursing at me and grabbing my phone,” Osmani explained.

“I can’t say what would have happened if other residents wouldn’t have intervened,” Osmani.

Osmani reported the attempted attack to the police.

The Kosovo Association of Journalists, AGK, condemned the attempted attack on Osmani.

“AGK demands from relevant institutions to investigate this attack as soon as possible,” the Association wrote in a statement.