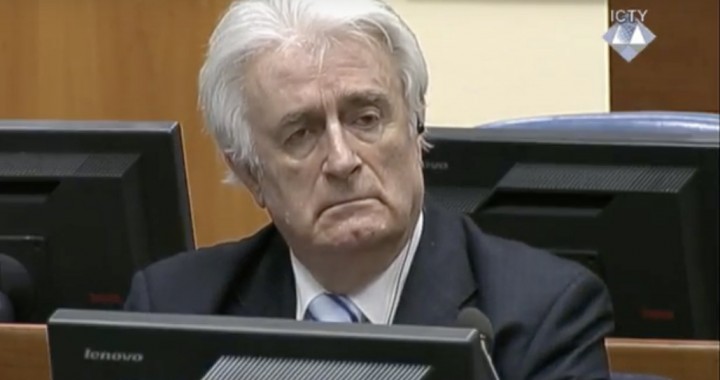 On Thursday, Bosnian Serb Radovan Karadzic was convicted by a UN tribunal of genocide, war crimes and crimes against humanity and sentenced to 40 years in prison. Judges found that in his capacity the Bosnian Serb leader during the three year war, he led a campaign of terror against civilians, which included the 44 month siege of Sarajevo and the slaughter of 8,000 Bosnian Muslim men and boys at Srebrenica.

In the verdict, which some observers have dubbed “the most important war crimes ruling in Europe since Nuremberg,” the judges found Karadzic guilty of 10 of 11 counts in the indictment for genocide, war crimes and crimes against humanity.

Karadzic, 70, was convicted of genocide in Srebrenica in 1995, and found guilty of engaging in a joint criminal enterprise to commit some of the worst atrocities in Europe since World War II.

He was also found guilty of the persecution of non-Serbs in 20 municipalities across the country, being part of a joint criminal enterprise in taking UN peacekeepers hostage, and terrorising the population of Sarajevo during the longest siege in modern history during which 11,541 people were killed.

However, the chamber found that there was not enough evidence to rule that Karadzic was guilty of genocide in seven Bosnian municipalities in 1992.  His lawyers said they intend to appeal the verdict.

“This is a very important day for international justice and for victims who waited 13 years for Karadžić’s arrest, and then another eight years for today’s verdict,” said John Dalhuisen of Amnesty International.

“We should not forget, however, that more than 20 years after the Bosnian War, thousands of cases of enforced disappearances are unresolved, with a disturbing lack of political will still blocking access to justice, truth and reparation for victims.”

Presiding judge O-Gon Kwon said that the entire trial procedure included 498 trial days, hearing testimony from 434 witnesses and written testimony from an additional 152, and a total of

The verdict comes as the International Criminal Tribunal for the former Yugoslavia, or ICTY, winds down, with plans to close next year after conducting more than 80 trials.

The genocide in Srebrenica and the ravaging of Bosnia and Herzegovina were a source of lasting regret for then-serving U.S. President Bill Clinton. He worried that the atrocities committed in Bosnia would be repeated in Kosovo, which spurred him to  support the NATO bombing of Serbia, which began 17 years ago today.

“NATO’s intervention 17 years ago was a new hope for our people that was experiencing the terminating terror of Milosevic’s regime,” wrote Kosovo President-elect Hashim Thaci today on his Facebook page marked the anniversary. “Diplomatic opportunities to prevent this terror that shocked the civilized world had been exhausted and to protect the values of this human civilization, NATO’s intervention became inevitable. It was a new chapter in Kosovo’s history that opened the road to our liberation and independence. We are forever grateful!”