A king of his own making

Kosovo rapper Blerim “Crown” Avdili has years of obscure recordings on the internet. With his new song “Cages,” he’s turning over a new leaf thematically and sonically. We sat down with the artist before his major debut at Dokufest.

Kosovo is the Balkans’ crown jewel for hip hop; even Albania’s artists model themselves after the aesthetics and sounds of Kosovo’s scene. Yet despite the country’s standout talent, many of the top-paid shqip hop artists tend towards gaudy, hyperprocessed pop infused with electro, latin beats, and tallava.

Meanwhile, Blerim Avdili, who musically goes by Crown, is nodding backwards to an old school style and experimenting with a full band. As a bandmate described him, Avdili stands out because he is stubborn in sticking to his own style.

“They look cool, but everyone looks the same kind of cool. The music sounds good, but everybody is making that,” Avdili told Prishtina Insight at his workplace at Prishtina Hackerspace, his base for his freelance graphic design career.

Blerim “Crown” Avdili is truly an underground rapper in that barely anyone seems to follow his music beyond a small but loyal fanbase. His extensive body of recordings is available on Youtube as far back as 2008–some videos have 200 views, some several thousand. He has only ever rapped in English, in part because it connects him to the wider audience of his second home, the United States. A small handful of fans know his lines by heart, which despite being in English, always reference his hometown Prishtina.

He recently threw together a full band, Crown and the ZBDs, which performed its first show at Dit e Nat in May, a high energy set that had the room shaking. His staccato, breathy rhymes blend well with live drums and bass.

Avdili’s new instrumental experiments are matched by recent shifts in his music’s style and themes. In his newest song, “Cages,” he moves away from the occasional bravado and chauvinism of his youthful rhymes to something more like veiled anger and political awareness.

I’ll never erase that old stuff. This is just a new phase.

Avdili’s family immigrated to the United States in 1999 during the Kosovo war. Around the early-to-mid 2000s, as he was at the cusp of adolescence, Avdili was listening to southern crunk rap with his American friends in a Colorado suburb. His older brother, a rapper who goes by the name of Sacrifice, was holing up in the family’s home studio, contributing to a fifty-plus global network of Albanian rappers called the Bloody Alboz.

By seventh grade, Avdili was a sort of sidekick to his brother during studio sessions, pressing the record button for him on a digital compact disc recorder. Meanwhile, Avdili and his friends were secretly writing raps of their own. They’d use a tape recorder to record their verses over rap outros.

“I just didn’t have the guts to tell my brother I was rapping. I didn’t think I was good enough, that I was just a cliché,” he said.

Sacrifice spent the next summer back in Kosovo, and in the new privacy of the Colorado home studio, Avdili really got experimenting, recording his first full song. When his brother returned home and went straight back into the studio, Avdili knew he’d be found out. Upstairs, he anxiously pressed his ear to the thin wood floor panels.

“I went down after a few minutes and my brother was like, ‘This is nice, Imma mix it for you,’” Avdili recollected, the relief still discernible in his voice all these years later. “I think the song was called ‘Young Crown, Still Loud.’” The name Crown has stuck since. 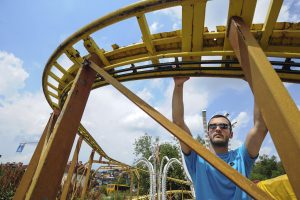 When he moved back to Prishtina as a teenager in 2008, two weeks before Kosovo declared independence, Avdili continued to rap in English. With his sister and brother still back in America, Avdili had the middle class Prishtina home mostly to himself. His parents let him convert a tiny extra room into a makeshift recording studio, where Avdili started charging neighborhood youth ten euros a pop to record a song.

Eventually his family invested in upgrading his workspace to a basement studio. “I had three suitcases stacked on top of one another, with a piece of wood as a tabletop. I had a little microphone, but it didn’t have a stand, so I had to hold it up for people to rap,” he said.

Avdili lost his father at age 14. While the family was mourning during the wake, which continues for seven days after the burial, Avdili was grieving in his own way – by making music. While relatives gathered in the home to wait on friends and acquaintances who would come to express their condolences, Avdili would come home and go straight down to the basement studio to write and rap without even pausing to take off his shoes or coat.

“I’d be downstairs, turning up the music really loud, and my brother would come down yelling,” said Avdili, alluding to Albanian customs of mourning in quiet, often not listening to music or watching television for up to 40 days after the death of a loved one.

“But it was a huge way for me to cope. I was releasing everything, expressing myself through rhymes.”

He made a mix tape around that time titled “The Lay Down.” Though he didn’t talk about the pain of loss with his family, he said, he was able to put it into verse.

“They weren’t songs that people would hear—they just had like 200 views on YouTube. It was a way to express what was inside, but I didn’t have the skill. I was just trying different styles of hip hop, different flows and deliveries.” 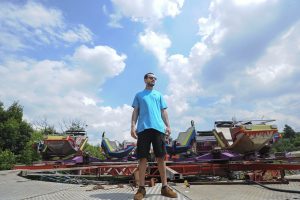 During the next several years Avdili had an on-again-off-again relationship with music. He was spending his time “hanging out with the wrong people in the wrong places.” He got kicked out of the American University in Kosovo, AUK, where he was studying media and communications, for bad grades. He was not focusing in class and he was not making any big plans. “In that year I just had problems. All types.”

In a song from 2011 titled ZBD, Avdili references zibidi (pronounced zee-bee-dee), a Prishtina slang with unknown origins describing a deadbeat: “I got nowhere to go, nowhere to be, I’m a plain ole zi bi di. I only showed up, ‘cause it’s free, the whole world knows I’m a zibidi.”

After failing out, Avdili cleaned up his act a bit. He focused on his relationship with his girlfriend and landed his first job selling vacuums door-to-door in Prishtina. He even briefly started taking classes again at AUK before leaving again.

“I actually quit because I didn’t like the situation at school, the students. I found no inspiration in class.” So you left, I asked? “Well, they probably kicked me out again,” he said, laughing.

Still, he continued on his grind. He stayed after hours trying to prove himself at a new internship with an ad agency and then started doing freelance on Upwork. Yet with his newly organized life and professional drive, he again went on a musical hiatus until a serious breakup around 2014-2015.

“It was another time in my life where I was like, I need to express myself,” he said. Music was always something he could delve into during times of turmoil. Around that time he started writing “Cages,” though it didn’t come out until  two years later. He was taking time to get back into the groove of writing and figuring out what he actually wanted to write about.

He was increasingly interested in talking about systematic problems with his friends, even “preaching” about things, he said: regarding politics, Prishtina, “the system,” the Internet, human disconnection. “Cages” is about the barriers that keep people from living up to their full potentials.

If you look at Cages, it’s a 180 change in ego. I’m calmer, more connected to the beat.

“It’s about the cages you’re born into,” he said, before then mentioning Kosovo and freedom of movement. “It’s about things small or big, addiction, writers block… it was something broad to express what I was going through.”

A group of about 15 people and a team core of five, mostly students at the University of Prishtina faculty of art and film, came together to film and produce the video. Some of them aren’t even listed in the credits, because “they were just those kinda people who want to remain anonymous.” Despite their small budget and most of the group having little production experience, the motley crew’s collaboration came together in a sleek video.

The “Cages” video is an exploration of the muted aggression and feelings of suffocation taken in from his surroundings, written within the daily chaos of Prishtina.

“My normal everyday process: I’m on a bus, I’m writing rhymes, then there’s these private taxies and people just beeping at you… people with their problems, yelling at you that you’re not doing something right.”

Visually and lyrically, he’s also exploring societal turbulence, from global acts of protest to symptoms of the ‘cages’ people live within: archival footage is threaded together, from the 2007 protests in Prishtina and the 1963 self immolation of Thich Quang Duc, to Albania’s centennial celebration of Independence Day and American Black Friday.

Though the scope may be overreaching, it’s a welcomed look inward and outward for Prishtina’s hip hop scene. And the change in tone is also accompanied by a change in sound, which one can only expect to continue to evolve.

On Kosovo’s budding trap scene, he said that though he respects what his peers are doing, he’s not about that lifestyle anymore.

Still, he chooses to keep his old songs up on his two Youtube pages–his first and his more recent page–even if he doesn’t necessarily relate to them anymore.

“I’ll never erase that old stuff,” he said. “I don’t relate to it, but it’s like a scar, a tattoo. I was feeling that in that moment, so that’s what I expressed. It’s just processing it and evolving. This is just a new phase.”

Suspensions of 131 university programs in Kosovo were justified, experts argue

by Qëndresë Mustafa
Next: News

Diaspora experiences from Cambodia to Austria