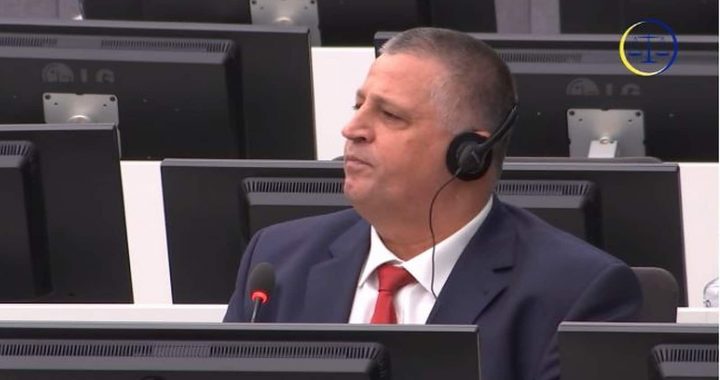 A pre-trial judge in The Hague entered a not-guilty plea after the Kosovo Liberation Army War Veterans’ Organisation’s deputy leader, Nasim Haradinaj, who is accused of obstructing justice, refused to attend the hearing.

Pre-trial judge Nicolas Guillou entered a not-guilty plea on behalf of Nasim Haradinaj, the deputy leader of the Kosovo Liberation Army War Veterans’ Organisation, at the Kosovo Specialist Chambers in The Hague on Friday.

The plea was entered in accordance with court’s regulations after Haradinaj did not appear in court.

Haradinaj’s lawyer told the court that his client did not want to take part in the hearing “as a protest about the way he has been treated”.

Haradinaj is accused of obstructing justice and intimidating witnesses. He and the KLA Army War Veterans’ Organisation’s leader, Hysni Gucati, were both charged after batches of confidential case files from the Specialist Chambers were leaked to them and both men urged media to publish the material.

Gucati pleaded not guilty to all charges last month.

Gucati and Haradinaj were arrested in September after a raid on the KLA War Veterans’ Organisation’s offices and sent to The Hague.

The indictment alleges that between September 7 and 25, 2020, “on the occasion of three press conferences and other broadcasted events, as well as through… social media statements, Mr. Gucati and Mr. Haradinaj revealed, without authorisation” lawfully protected information.

It also claims that they identified “details of certain (potential) witnesses”.

The Specialist Chambers were set up to try former KLA guerrillas for crimes allegedly committed during and just after the Kosovo war from 1998 to 2000. They are part of Kosovo’s judicial system but located in the Netherlands and staffed by internationals.

The so-called ‘special court’, widely resented by Kosovo Albanians who see it as an insult to the KLA’s war for liberation from Serbian rule, was set up under pressure from Kosovo’s Western allies.

Those awaiting trial for wartime crimes include Kosovo’s recently-resigned President Hashim Thaci and former Democratic Party of Kosovo leader Kadri Veseli alongside two other guerrillas turned politicians, Jakup Krasniqi and Rexhep Selimi. They have all pleaded not guilty.