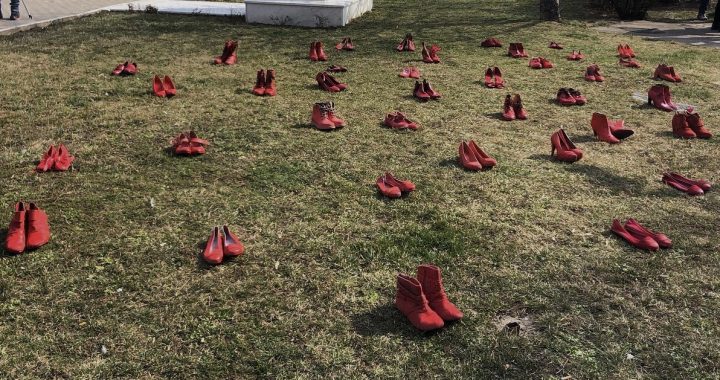 Kosovars Protest in Red Over Violence Against Women

On International Women's Day, activists and citizens dressed in red marched, protested and placed blood-coloured stains on justice and security institutions, the government – and the streets of Pristina.

March 8 in Kosovo was marked by a march in the streets of the capital, where justice was sought for women who have been murdered or who have experienced violence, sexual harassment and gender inequality and other problems.

The group We March We Do Not Celebrate (Marshojmë s’festojmë) started the march from the Palace of Justice for a couple of kilometers through the streets of Prishtina to the other justice-related institutions.

The protesters wearing red ribbons walked through Zahir Pajaziti Square where hundreds of citizens joined in, to continue the protest to the main Police Station, the Prosecution Office and the Judicial Council, before ending up in front of the building of the government.

In front of each institution the protesters threw pyrotechnic devices with red smoke and hurled red paint as a symbol of women’s spilled blood. The slogan, “How many more killed women?” was written on the buildings.

Meanwhile, 48 red shoes were placed in front of the government building for each woman killed in Kosovo since 2010, and a long red carpet was released from the building of the Ombudsperson.

One of the protesters, Vlora Gashi, speaking in front of the Palace of Justice, said that it was justice institutions that had failed to protect women even when they asked for help.

“On this March 8, we denounce all the justice institutions as guilty for the murder of women. Since 2010, 48 women have been killed by men in Kosovo,” Gashi said.

“We know that as long as there are judges, prosecutors and institutions who believe that women deserve to be harassed, raped, beaten or killed, there can be no security and no peace for us,” she added.

Bjeshkë Guri, an activist from We March, We do Not Celebrate, said in front of the government building that March 8 cannot be a holiday as long as girls and women are sexually harassed, raped, beaten, denied the right to work and not recognized for paid work.

“Justice for those women who were killed by men with the knowledge of the state, justice for those girls and women who are currently living under violence and fear; we are also reminding the government and any other institution that we will not stop opposing our oppression,” she said.

Activists’ slogans included: “All the killers are recidivists”, “The Prosecution and the Police have blood on their hands”, “How many lost calls?” and, “How many more killed women?”

Another activist, Liridona Sijarina, said that this March 8, cannot be marked without returning to the work and commitment that women have made over the years to turn this day into a point where they oppose inequality generally.

“In addition to standing in solidarity and hand in hand with each other, we also stand in solidarity with the Ukrainian people and with any people who are unjustly being held in violence and oppression,” she said.

The march, which has been organized for several years in a row on March 8, aims to draw the attention of official institutions, so that cases of violence against women are treated with priority.