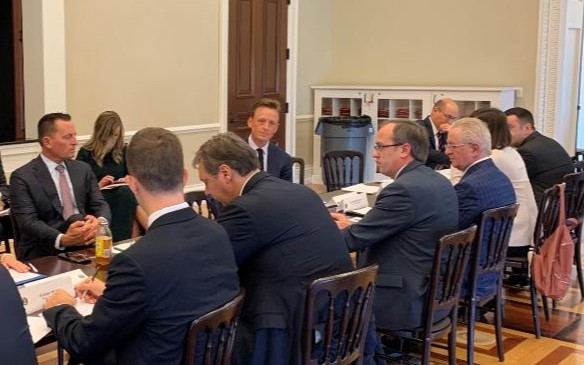 Discussions between Avdullah Hoti and Aleksandar Vucic are set to continue at the White House on Friday, with an agreement addressing economic issues expected to be signed.

Kosovo Prime Minister Avdullah Hoti has described Thursday’s discussions with Serbian President Aleksandar Vucic in Washington DC as “historic”, adding that the White House meeting was an important step towards concluding a final agreement with Serbia.

Speaking to reporters following Thursday’s talks, Hoti stated his belief that some form of agreement will be confirmed on Friday. “Tomorrow we are waiting to finalise a commitment that we have had for a long time,” Hoti said on leaving the White House. “More detailed information will be available tomorrow.”

During Thursday’s discussions, senior Serbian officials claimed that an initial agreement was proposed which included “mutual recognition.” Serbian finance minister Sinisa Mali told reporters that point 10 of a 16-point plan presented to the Serbian delegation by the Americans stipulated recognition for Kosovo’s independence.

Richard Grenell, US Special Envoy to the Kosovo Serbia dialogue, publicly denied the assertion on Twitter, labelling a story which stated that he presented a document to Vucic that would recognise Kosovo’s independence as “not true.”

However, speaking after the meeting President Vucic also claimed that he had “rejected a point about recognition.” Serbian news agency Tanjug reported Vucic as saying that “Trump’s people respected that, those points are not in the new documents and that will no longer be a topic.”

The Serbian president also expressed optimism that some form of deal could be reached on Friday, stating that three documents were being negotiated. “We will wait for the final document tomorrow and we will be able to show it, if there is one,” he said.

Hoti refused to be drawn on the subject of whether the Serbian delegation rejected the option of recognising Kosovo.

“One thing I can tell you is that harmful agreements for Kosovo have never come, and will never come, from the White House,” the Prime Minister said. “We have made great progress in advancing economic cooperation and we are one step closer to concluding agreements.”

US National Security Adviser Robert O’Brien hailed Thursday’s talks describing them as a “very good round of discussions.” O’Brien also thanked the US International Development Finance Corporation, the Millennium Challenge Corporation and EXIM Bank for joining the discussions.

Reporters in Washington DC stated late on Thursday that the Kosovo and Serbian delegations have already agreed on a final draft of an agreement that exclusively addresses economic issues, and is expected to be signed on Friday in the presence of US President Donald Trump.