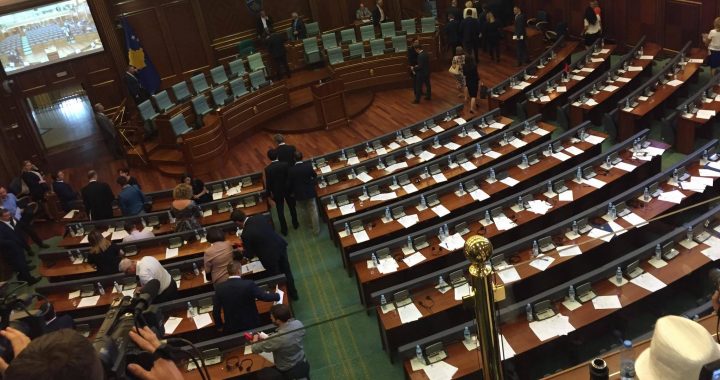 The sixth legislature of the Kosovo Assembly was constituted today, but the majority coalition PAN failed to propose a speaker, forcing session leader to postpone the meeting to Friday.

Kosovo Assembly members, voted in by the June 11th elections, took their seats in the Assembly hall for the first time as the new legislature on Thursday. After almost a two hour delay, the 120 MPs were sworn in as part of the sixth legislature of the Republic of Kosovo.

The oldest MP, Adem Mikullovci from Vetevendosje, opened the session by reciting a poem as the leader of the session. His assistant, the youngest MP, had to be replaced because Teuta Rugova, LDK MP, was missing in action. She arrived almost two hours later, and took her seat on Mikullovci’s right side.

Although there was a quorum, MPs from the Democratic Party of Kosovo, PDK, and the Alliance for the Future of Kosovo, AAK – partners of the majority coalition – were not present in the beginning.

MPs finally joined almost a quarter to noon and all were sworn in. But the leader of the session was unable to continue with the next point on the agenda. Representative of the PAN coalition Enver Hoxhaj asked his fellow MPs to postpone the vote on the speaker of the Assembly for two hours.

“As a coalition we demand that this point in the agenda to be postponed for two hours, because we need additional consultation with our coalition partners,” said Hoxhaj. It is unclear whether the PAN coalition, which won the elections with 33 per cent of the vote and according to a 2014 Constitutional Court ruling has the right to propose the speaker of the Assembly and government leader first, has the necessary votes.

The vote was divided: 60 MPs voted for the postponement, 60 voted against. A short debate followed, but Mikullovci, the session’s leader decided to close the session.

“According to the constitution, the proposal is annulled, and with this I close this session,” he said, with MPs consequently leaving the room.

It is not clear whether Mikullovci violated procedure by closing the session before candidates for Speaker of the Assembly were voted on. It is also unclear who is responsible for calling the next session.

“This has never happened before. People demanded time to consult, so we can go to the next step,” said Fatmir Limaj, leader of NISMA and member of the PAN coalition. “This is not a political battle.”

“We thought today would be a festive session, but unfortunately, it is visible that they are irresponsibly blocking the establishment of the government,” Hoti said.

The session was resumed at 3 p.m. but PAN coalition members declared that they would not be attending it. As a result, session leader Adem Mikullovci postponed the vote on the Speaker of the Assembly to Friday at 10:00 am.

This article was updated on August 3, at 3:40 pm to account for the final announcement made by the leader of the session Adem Mikullovci.