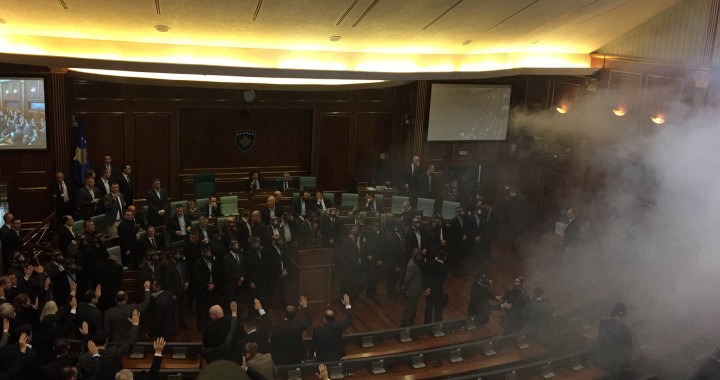 Assembly Speaker vows not to give in to opposition

After a long day of interrupted parliamentary sessions, Assembly speaker Kadri Veseli said that giving into the demands of the opposition, including holding snap elections, would only “bring anarchy” to Kosovo.

He spoke after the parliamentary session was interrupted three times after members of parliament set off teargas inside the plenary hall. When the session reconstituted at 3PM, MPs from the opposition were not allowed to enter the hall, except for Vetevendosje MP Ilir Deda, who called for negotiation between the parties.

Without dialogue, he said, “Kosovo will end up in a bad place, no one will come to fix this situation as long as we stay barricaded against each other.”

Shortly after he was blocked from attending the session, opposition member and leader of the Alliance for the Future of Kosovo (AAK) Ramush Haradinaj resigned his post in parliament today. “As the Kosovo assembly has become an anti-democratic institution… I give my irrevocable resignation from the member of parliament mandate,” he said in a public statement.

From early in the morning, there was a heavy police presence ringing the parliament, and a sizable crowd gathered in the afternoon after being called by the opposition, in order to protest in case the parliament decided to vote for the next president, which was not on the agenda but is expected in the coming weeks.

Opposition leader Albin Kurti vowed that the protest will continue and announced a new protest for February 27.

The Assembly was scheduled to vote on a number of draft laws, including a loan agreement with the European Bank for Reconstruction and Development, another loan from an Austrian bank, and an amendment to the Constitution. The session got underway once the opposition MPs were blocked.

After the session got underway, U.S. Ambassador said he was disgusted by the opposition’s tactics and appreciates the work of the Kosovo police.

“This damages Kosovo’s future…I also have to commend the work of the members of the Kosovo police who are being put in an extremely difficult position by the members of the Kosovo opposition who clearly believe they are above the law. Seventeen to eighteen years ago many thousands of citizens fought and died to gain independence for the country. They were looking for independence but they were also looking for the citizens of Kosovo to be able to live their lives in peace. The people who are throwing tear gas in parliament, the members of the opposition, are depriving the people of the right to live peacefully in an independent and democratic country and I deplore that.”