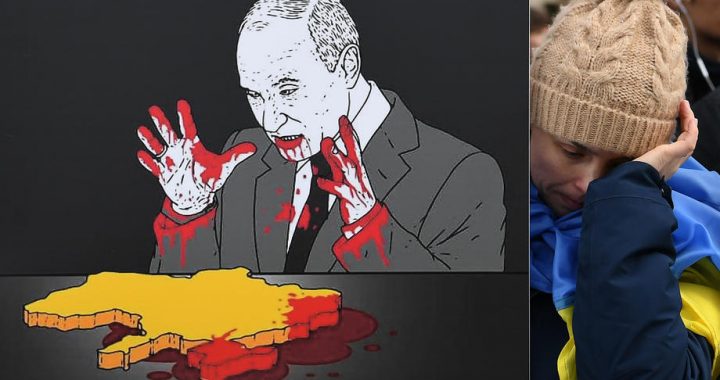 A Ukrainian woman weeps during a protest against Russian invasion on Ukraine outside Downing Street in London, Britain, 24 February 2022. Russian troops launched a major military operation on Ukraine on 24 February, after weeks of intense diplomacy and the imposition of Western sanctions on Russia aimed at preventing an armed conflict in Ukraine. Photo: EPA-EFE/ANDY RAIN

The President of Kosovo, Vjosa Osmani, said the people of her country support the Ukrainian people as they face an unprovoked war as a result of Russian aggression.

Russian forces early Thursday launched a major military offensive in Ukraine from multiple points, with rocket attacks and explosions reported in many major cities, including the capital, Kyiv.

Ukrainian President Volodymyr Zelensky said the invasion could be the beginning of a great war on the European continent.

“We will work with our allies to stop any destabilization of our region. Russian hegemony will not triumph. Freedom and democracy will win,” Osmani posted on Twitter.

“The Russian invasion that is taking place in Ukraine, is the largest military aggression, not only in Europe, since the end of the Second World War,” he said.

“In these sad moments for the whole Europe, we stand in solidarity with the people of Ukraine and stand together with the EU, NATO, the US, and the UK for state sovereignty, territorial integrity, the country’s independence and the right of self-determination for the people of Ukraine,” Kurti further stated.

Russia’s attack on Ukraine was also condemned by the Assembly of Kosovo, the country’s parliament,  at the beginning of Thursday’s session.

“In consultation with the parliamentary groups of the Assembly and on behalf of the deputies, the Assembly of the Republic of Kosovo  strongly condemns Russia’s military aggression against Ukraine,” said Konjufca.

Russia’s attack has also been condemned by the leaders of Albania, North Macedonia, Croatia, Montenegro and Bosnia and Herzegovina.

There has been no reaction from Serbia, whose president, Aleksandar Vucic, convened a meeting of the National Security Council on Thursday.

The Prime Minister of Albania, Edi Rama, on Twitter joined allies in NATO and the European Union in condemning Russian aggression.

The President of North Macedonia, Stevo Pendarovski, also condemned the Russian attack, calling it a violation of Ukraine’s sovereignty and territorial integrity and a threat to European stability.

Montenegrin President Milo Djukanovic on Twitter joined EU calls for Russia to end hostilities and withdraw its forces from Ukraine.

Croatian Prime Minister Andrej Plenkovic said it was an unprovoked attack and a grave violation of Ukraine’s sovereignty and international law.

The chairman of the Tripartite Presidency of Bosnia and Herzegovina, Zeljko Komsic, said Bosnia will provide support to Ukraine, within  its capabilities.

Ahead of the attack in Ukraine, Russian President Vladimir Putin said this week that Moscow recognized the independence of two Russian-supported breakaway regions in Ukraine; Donetsk and Luhansk..

This has also been condemned by the West.