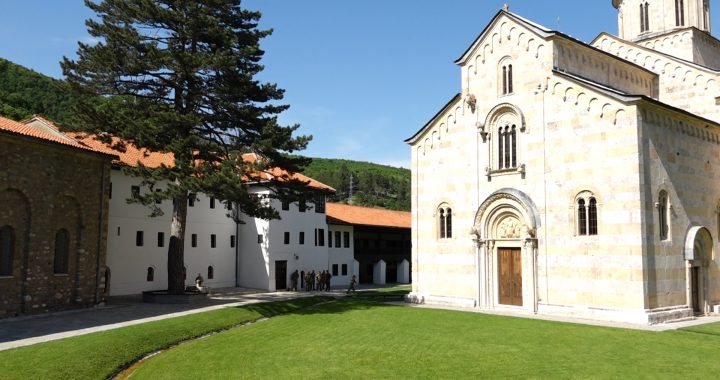 Forty Kosovo CSOs have expressed discontent with moves to add a medieval orthodox Monastery to a list of endangered sites in Europe.

Kosovo NGO have criticised the decision of Europa Nostra, which specialises in the protection of cultural heritage, to shortlist a 14-century Serbian Orthodox monastery in western Kosovo on its list of the most endangered sites in Europe.

The NGOs claim the inclusion is based on”false and unverified data”.

Europa Nostra noted that the monastery at Decani is “the only monument in Europe under such robust international military protection for a continuous period of 20 years”, citing the protection supplied by the NATO-led peacekeeping force in Kosovo, KFOR.

But the Kosovo CSOs disagree. “The data presented in the nomination file are mainly extracted from Serbian institutions’ reports, which for political purposes have been already proven to falsely present the reality of Kosovo,” they said in a joint letter.

“The published document states that the Decani Monastery was the target of ‘an ISIS attempt in  2016’ which in fact refers to an incident with graffiti written on a peripheral wall in support of ISIS  but, however, the perpetrators have never been identified,” the letter added.

“We invite Europa Nostra to visit Kosovo and meet all stakeholders in order to verify all data in accordance with the criteria of the ‘7 Most Endangered Heritage Sites in Europe’ program. This will make Europa Nostra’s work reliable and trustworthy to everyone. Until this is accomplished, we, as civil society organizations, are worried about the negative consequences of the Europa Nostra decision, which has the potential to jeopardize the process of building mutual confidence between Kosovo’s communities,” the letter reads.

In their joint letter, dated March 18, Kurti and Osmani insisted that Serbian Orthodox Church sites in Kosovo enjoy “all constitutional, legal and institutional guarantees that ensure full respect of their rights” under Kosovo’s laws and constitution, and have done since the country declared its independence from Serbia in February 2008.

They added: “Let us inform you that the Serbian Orthodox Church … enjoys the rights… but refuses to recognise the state of Kosovo, which is a precondition to enjoying those rights.”