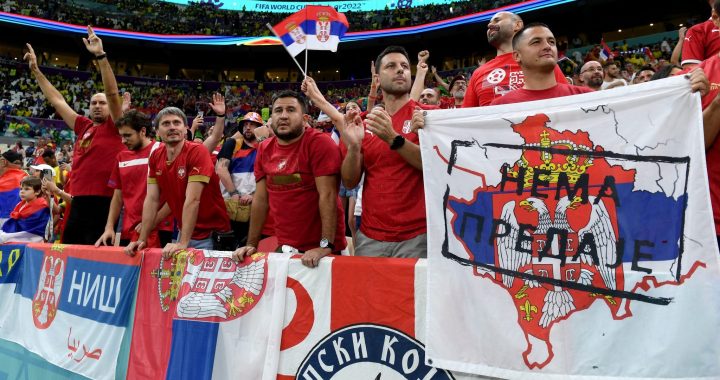 Serbia fans hold a banner with a map of Kosovo on it before the FIFA World Cup 2022 match between Brazil and Serbia at Lusail Stadium, Qatar, 24 November 2022. Photo: EPA-EFE/Neil Hall

Kosovo's Football Federation and ministers have called on FIFA to take action over the provocative banner pictured on Thursday in the Serbian national team's locker room in Qatar.

The Football Federation of Kosovo, FFK, on Friday said it had filed a complaint to the world football governing body, FIFA, about a banner shown on Thursday in the Serbian national team’s locker room in Qatar.

The banner was reportedly pictured before Serbia played Brazil on Thursday in the first round of the World Cup in Qatar. Brazil beat Serbia 2:0.

The banner shows a map of Kosovo with a Serbian flag within it and with the words “No Surrender” (“Nema Predaje”), seen as a reference to Serbs in northern Kosovo resisting government pressure to change Serbia-issued licence plates for Kosovo-issued ones.

The FFK called the banner “aggressive” and “unacceptable”.

“Such chauvinist acts have no place in sporting events, let alone inside the premises where the biggest event of world football is taking place,” it said in a statement.

“FFK, as an equal member of FIFA, demands this institution undertake sanctioning measures against acts that incite hatred among people and contradict with human values,” it added.

“We expect concrete actions from FIFA, considering that the FFK is a full FIFA and UEFA member,” Çeku wrote.

This is not the first time global sporting events have been hijacked by political disputes.

Xhaka and Shaqiri are both ethnic Albanians from Kosovo, which broke away from Serbia in war in 1999 and declared independence almost a decade later but is not recognised by Serbia.

On Friday, the FFK said that, as the most popular sport in the world “football conveys values of unity and not of division… And this act does not imply such values and should be punished as such”.