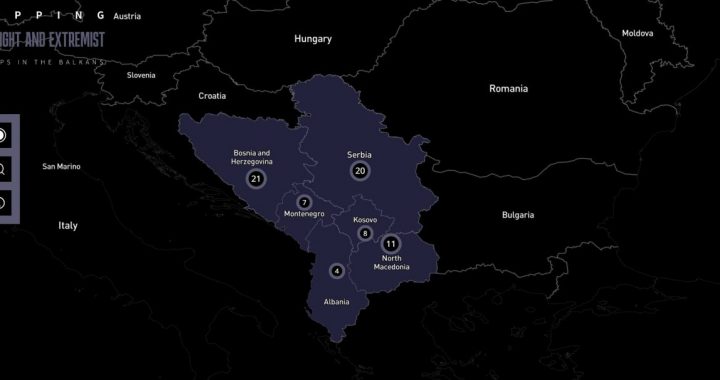 The interactive map of far-right and extremist groups in the Western Balkans. Photo: Screenshot

The growing concern about the threat from extreme right-wing groups in the Balkans has caught justice institutions in Kosovo asleep.

A BIRN investigation has revealed that Kosovo justice institutions have a serious lack of capacity to deal with this phenomenon.

Since the beginning of the war in Ukraine, there have been reports about the increased activities of extreme right-wing groups in the Western Balkans, including in Kosovo.

A European Commission report on violent extremism in the Western Balkans qualified Kosovo as one of the countries where extreme-right groups pose a danger to society.

In August, Prime Minister Albin Kurti stated in an interview for REL that security institutions had uncovered the activities of 10 far-right organizations.

However, BIRN found that Kosovo’s justice institutions still do not have the capacity to deal with this form of extremism.

The collected data show that while most judges and prosecutors have been trained to deal with religious extremism, dealing with other forms of right-wing extremism has not been part of the focus and capacity building of these institutions.

As a result, some crimes motivated by extreme-right ideas have not been investigated or documented.

The spokespersons of the five courts of Peja, Gjakova, Ferizaj, Prizren and Gjilan, told BIRN that no judge in these courts has attended training on the extreme right.

The courts of Pristina and Mitrovica did not provide data on whether such training sessions were organized.

The Judicial Council of Kosovo, in a response to BIRN, confirmed that justice organs had no training programs designed to address the activities of extreme-right groups.

“There is no training that specifically deals with these topics, but within the program for continuous training for judges, the Academy of Justice holds a training on ‘National, racial, religious or ethnic incitement of hatred, polarization or intolerance ’, which  is a one-day-training and covers the treatment of hate crimes,” said the KJC.

The offices of Gjakova, Prizren, Ferizaj, Pristina and Mitrovica confirmed that they do not have prosecutors trained to investigate right-wing extremism.

The handling of acts of terrorism in Kosovo is the sole competence of the Special Prosecutor’s Office; three prosecutors deal with the investigation of terrorism. They have followed mainly programs of terrorism based on religion.

A list of other criminal offenses related to the activity of far-right groups, such as hate crimes, attacks on members of the LGBT+ community, discrimination, etc., are investigated by prosecutors of the basic court, who have not been trained to ascertain whether the crime was motivated by the propaganda of extreme-right groups.

The Academy of Justice is the institution that deals with increasing the professional capacities of judges and prosecutors.

Its training programs lists a two-day program for training in the investigation and combating terrorism.

Data show that about 40 employees of the justice system have attended this program since 2014. But leaders of the academy emphasize that this program does not address all forms of extremism, including the extreme right.

“As long as terrorism continues to remain one of the main security threats in the country, it is obviously necessary to be in the training program and address all forms of presentation so that such cases are dealt with in accordance with adequate laws and resolved as they deserve,” the Academy of Justice said.

During this year, several incidents recorded in the north of Kosovo were attributed to the activities of extreme-right groups.

In some cases, police were attacked with weapons, while at least three cars of ethnic Serbian citizens were burned by groups which are said to belong to the extreme right.

The Special Prosecutor’s Office of Kosovo told BIRN that it is investigating leads for these events, but so far there have been no arrests or announcements about the persons responsible for these crimes.

Experts state that hate crimes incited by right-wing extremism have also occurred in the past. However, officials of the justice system say there are no indictments that identify the organizations that are responsible.

Labinot Leposhtica, a legal expert, says that in the justice system there are some cases that meet the criteria to be judged as cases motivated by extreme-right ideas.

However, according to him, prosecutors have failed to look at these cases from this angle.

“One of the cases that meets the criteria of being treated as an extreme right group is ‘People’s eye’, as a case of a group that attempted crimes clearly for political reasons, by labeling others as traitors,” said Leposhtica.

Judge Valon Kurtaj heads the Special Department of the Court of Pristina. This department specializes in handling high-profile cases of corruption and terrorism. Kurtaj says that in this department they have no indictments of this type.

“We do not have any case of the extreme right in our court with any judge or in the Special Department,” Kurtaj told BIRN.

Kurtaj does not rule out possible manifestations of other forms of extremism, apart from religious ones, in cases that he has handled in his department.

He did not comment on the ‘People’s Eye’ case, as he said it is still in process, but insisted that the judges of the Special Department know what the new forms of extremism are.

Kurtaj does not deny that the development of knowledge implies a need for the advancement of judges who deal with these cases.

“We have innovations at work which we have to deal with, and training and developing capacities come to the forefront of these new phenomena,” said Kurtaj.

Leposhtica also says prosecutors do not give much importance to those who ideologically push people into such activities.

The analysis of the Academy of Justice shows that the challenges of increasing capacities in this direction continue. In its response, in addition to the lack of training on ideologies, the need for financial investigations is also mentioned.

According to the agency, these investigations are greatly hindered by the lack of access to mechanisms such as INTERPOL, since Kosovo is not yet a member, due to its contested political status.