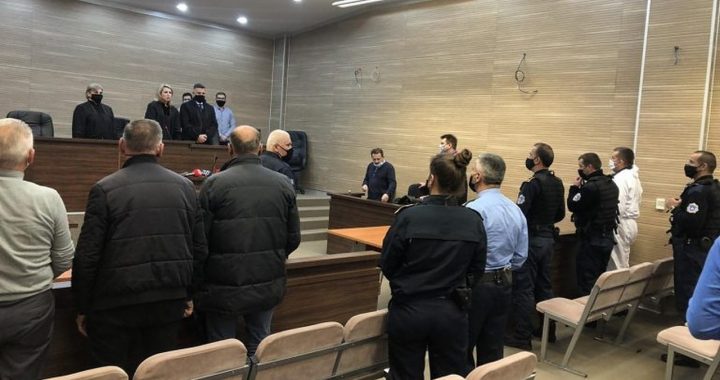 The announcement of the initial judgment at the Pristina Basic Court in December 2020. Photo: BIRN.

Kosovo’s Supreme Court upheld the verdict sentencing Nenad Arsic to six years in prison for assaulting two Kosovo Albanians and forcing one to drink alcohol and sing a Serbian song during a police operation in 1999.

Arsic was found guilty of committing the crimes on May 21, 1999 during a police operation against Kosovo Albanian civilians in Pristina’s Emshir neighbourhood.

He was part of a uniformed group who went to the Shala family’s home and ordered them to leave the house. They then beat up two members of the family.

After the beating, Arsic forced Jakup Shala, who had serious health problems, to drink alcohol and sing a popular Serbian nationalist song called ‘Ko to kaze, ko to laze Srbija je mala?’ (‘Who is Saying This, Who is Lying That Serbia is Small?’).

Arsic was sentenced to six years in prison by Pristina Basic Court in December 2020. Kosovo’s Court of Appeals upheld the verdict in May 2021.

The Supreme Court ruled that the first-instance court had provided comprehensive reasoning for its judgment, and that the witnesses had given “credible and consistent evidence”

“Their testimonies have been decisive in this criminal case,” the Suptreme Court said in a statement.

The Serbian government’s office for Kosovo condemned the judgment, claiming that it proves that courts in Pristina are anti-Serb.

“It is unacceptable and shameful that Serbs in Kosovo and Metohija are denied the right to a fair trial and that they are persecuted and charged under secret indictments and sentenced to many years in prison without solid evidence, with numerous violations of their rights,” it said in a statement.