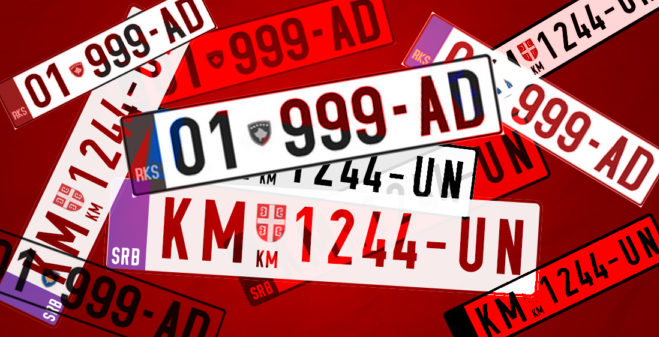 Amid the open displeasure of the US, EU, opposition parties and local Serbs in the North, the government has started implementing penalties for illegal use of license plates.

On Friday, the government of Kosovo decided to step up the process of converting license plates to Kosovo-issued ones, although the US and the EU have both urged Kosovo to postpone the deadline for another 10 months.

US State Department spokesperson Ned Price told media that the US was “disappointed and concerned” that the government had not postponed implementation of the decision to ban Serbian license plates.

“We came out with a communiqué last week to make clear our belief and the belief of our international partners that the Government of Kosovo should postpone the implementation period,”  he said in a press conference on Monday.

After the government’s decision, the European Union also reacted, saying that Kosovo could gradually remove the Serbian car plates but the process must go in accordance with dialogue agreements.

The EU said it is also disappointed that Kosovo did not follow the advice of its partners for a longer transition period.

“Kosovo has the right to gradually remove KM signs but the process must be developed in the manner agreed in the [EU-facilitated] Dialogue and implemented in a comprehensive and consultative manner,” an EU communique said.

The government started implementing its decision on Tuesday in three phases: firstly a reprimand, then fines, and then forcing drivers to attach probationary plates to their cars.

The first phase is from November 1 to November 21.

On October 31, local Serbs in the North told Dukagjini TV that this decision had placed them in a dilemma. If they register their cars with Kosovar authorities, their cars risk being burned by criminal groups, and if they don’t, their cars get confiscated by Kosovo institutions.

According to Price, Kosovo has the right to make its decision, but the deadline should have been postponed. Price said the US has been clear that they want full postponement in the implementation of these issues, and not a partial postponement in stages.

Criticism has also come from opposition parties in Kosovo.

“In this situation, the goal of the government should be either the implementation without further delay of the legitimate decision in service of the rule of law also in the north of the country, or full coordination with international partners to strengthen the position of Kosovo in the process of the Dialogue. With the government’s decision, none of these goals were achieved,” Bernard Nikaj, of the opposition Democratic Party of Kosovo, PDK, told a press conference on Saturday.

The leader of the opposition Democratic League of Kosovo, LDK, Lumir Abdixhiku, wrote on Facebook that “it is very worrying that the US expresses disappointment and concern over the actions of the government of Kosovo.”

On Friday, the main ethnic Serbian party, Lista Srpska, on Facebook said that “imposition of the first measure of the fine will be a cause of a fierce response and resistance from the Serbian people,”  adding that PM Albin Kurti’s decision “is nothing but a desire to continue with the plan to deport the Serbs from their centuries-old hearths.”

In 2011, Kosovo and Serbia reached an agreement under which Kosovo authorities would issue license plates marked “RKS” for the Republic of Kosovo but, in a concession to Serbia’s refusal to recognise its former province as a state, also allow “KS” plates, denoting simply “Kosovo”.

The move was aimed at encouraging Serbs in the Kosovo north to start using Kosovo-issued plates. In 2016, Kosovo extended the validity of KS plates for another five years, and made Serbian-issued licence plates denoting Kosovo cities illegal.

Stickers were supposed to be used to cover state symbols in both countries. However, this agreement was never implemented and expired in September 2021.

When the measure expired, the government decided against extending it. But the change sparked anger among Serbs, who erected blockades at two border crossings. The dispute was temporarily resolved by re-introducing the sticker system. A more permanent solution was supposed to be found by April 21 2022, but this did not happen.

In June, the Kurti government made it obligatory for drivers in Kosovo to use RKS plates alone, and launched a publicity campaign, mainly in Serbian, to explain the procedure and the incentives.