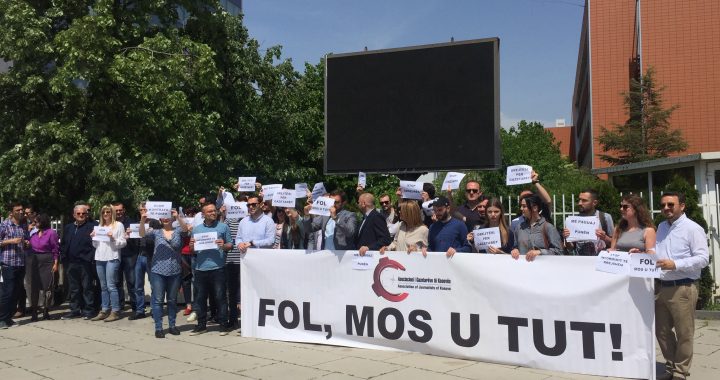 Journalists and media representatives gathered in Kosovo's capital to mark World Freedom of the Press Day.

Dozens gathered in Prishtina on Wednesday for World Freedom of the Press Day under the slogan “Speak, don’t be afraid!” (Fol, mos u tot!).

The demonstration, organized by the Association of Journalists of Kosovo and the Press Council of Kosovo, brought together journalists, civil society representatives, and citizens opposing limits on media.

Demonstrators held signs referring to journalistic ethics and freedoms, such as “Stop fake news” and “Stop censorship,” as well as signs demanding labor rights, including “We want contracts” and “Pay my labor.”

“‘Speak, don’t be afraid’ is the motto of this action, and through it we call on all Kosovo journalists to speak independently from pressure, blackmail, or even attacks from various interest groups,” said Shkelqim Hysenaj, the head of the Association of Journalists of Kosovo.

The 2016 Nations in Transit report for Kosovo, published last month by Freedom House, stated that media pressure has recently contributed to strengthened democracy in the country. Overall, the report claimed, Kosovo’s legislation on media freedom offers high standards of journalistic protections. However, reporting quality is often poor and the media environment is “subjected to political interference.”

Threats against journalists in Kosovo have also endangered the media landscape. Recent alleged threats against a documentary journalist, a newspaper editor, and a playwright raised alarm amongst civil society and media organizations about freedom of information and freedom of expression.

Concerns also circulated last week when a proposal to amend the Kosovo Criminal Code by adding articles on defamation against the President, government, and state symbols was leaked. Following public pressure, the proposed article was withdrawn.

“After taking into consideration the concerns raised by civil society, the Ministry of Justice informs the public that, effective immediately, it revokes the proposed Articles 134/C (“insulting the state and state symbols”) and 134/D (“insulting constitutional bodies”) from the proposal for the supplement and amendment of the Criminal Code,”  the Ministry of Justice informed on Sunday through a press release.