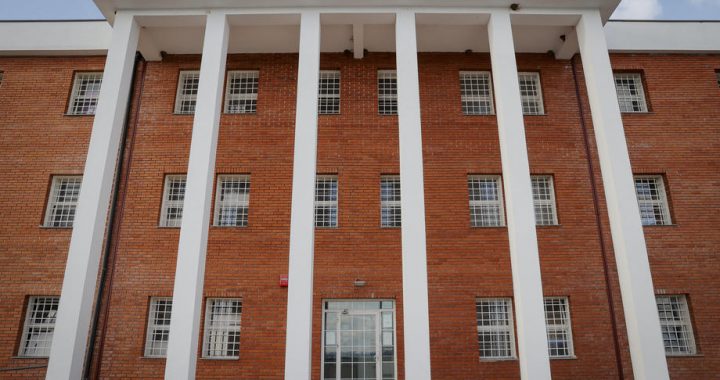 General view of the prison in Gjilan, Kosovo, 21 December 2021. Kosovo Minister of Justice Albulena Haxhiu (not pictured) and her Danish counterpart signed a letter of intent on 20th December 2021 for renting 300 prison cells in Kosovo to house the overflowing Danish prison population for 210 million euros. The ratification process by respective parliaments is expected to take place in early 2022. EPA-EFE/VALDRIN XHEMAJ

Kosovo to earn 210 million euros from helping Denmark to ease its overcrowded prisons – money that will be invested in Kosovo’s energy sector.

Kosovo Minister of Justice Albulena Haxhiu on Monday said that the country would offer the Detention Centre in Gjilan to the Danish Ministry of Justice to hold 300 deported prisoners for a period of 10 years.

“Kosovo has been assessed as a serious party, a good administrator of correctional institutions, and its respect for the rights of persons deprived of liberty and its sufficient capacities have been assessed by credible reports,” said Haxhiu.

Haxhiu said that they will discuss the details of the agreement before its ratification in the Assembly of Kosovo.

Danish Minister of Justice Nick Hækkerup thanked Kosovo for “the hospitality they have given us and I am pleased to have signed a letter whose purpose is the cornerstone of future agreements”.

Hækkerup said Denmark contacted Kosovo a year ago on this issue and the two sides had had a good dialogue and reached full understanding. The agreement would help Kosovo develop its capacity for the rule of law, he added.

Haekkerup announced the plan on Wednesday after negotiating an agreement internally on the matter with the Danish’s People’s Party and the Conservatives. Announcing the agreement, the minister said that, among other things, they had agreed to rent prison places in Kosovo to hold convicts from third countries.

This project seeks to ease prison overcrowding in Denmark and expand its prison estate by 326 places between 2022 and 2025, the Justice Ministry explained. According to them, the deported criminals will not be of high risk.

Kosovo will meantime earn 210 million euros. This money will be invested in the energy sector.

Kosovo is facing an energy crisis as a result of rising global energy prices and rising demand in winter, as temperatures drop.

Minister of Economy Artane Rizvanolli expressed satisfaction with an agreement that contains the possibility of developing the energy sector. “The energy crisis has reminded us once again how important it is to have security of energy supply and the need for diversification of energy resources,” Rizvanolli said.