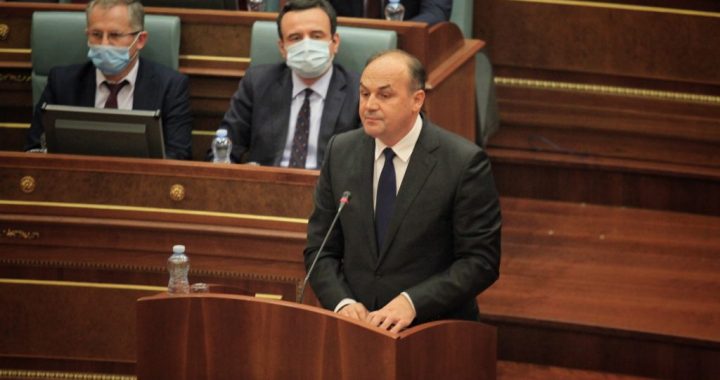 Key figures in PDK and LDK have criticised the Kurti government’s programme, describing it as lacking in substance and featuring policies that will be impossible to implement.

Prime Minister Albin Kurti has come under fire from numerous high profile members of the opposition critical of his administration’s governing programme, which was unveiled last week.

The programme, which was set to be adopted by the parliament at a Kosovo Assembly session on Monday, was denounced by all leading opposition parties, with LDK leader Lumir Abdixhiku describing it as one of the most superficial and non-substantive documents he’d ever read.

Abdixhiku added that waiting 60 days to receive a 60-page programme raised doubts about whether the government would be able to tackle the issues facing Kosovo in the economy, health, law and order and education.

“You are not clear what you will do now you are in power,” he told Kurti during the parliamentary session.

Introducing the programme, Kurti stated that his government ‘s primary focus was tackling the COVID-19 pandemic, pointing to the drop in cases in recent weeks, and the arrival of vaccines throughout the month of May. But the prime minister added that the government was also ready to enact the reforms outlined by his party Vetevendosje in the previous election campaign, particularly in relation to the economy.

Kurti reiterated numerous policies from Vetevendosje’s election campaign which were incorporated into the programme, including raising the minimum wage and providing free higher education at public universities and affordable housing to 4,000 families.

However, PDK MP Bedri Hamza questioned how these policies would be financed. “We have no problems with the pledges but how will you implement them?” he asked.

Hamza pointed to promises made to raise the minimum wage to 250 euros per month as well as to provide financial support to young people during the economic recovery. “This costs tens of millions euros and there is no explanation as to where this money comes from,” he said.

“It is an injustice to the 50 percent of citizens who voted for you,” he said.

Later in the session, the head of PDK’s parliamentary group, Abelard Tahiri, criticised Kurti for a planned trip to Brussels on Tuesday, where he will be received by EU High Representative for Foreign Affairs, Josep Borrell alongside other leaders from the western Balkans.

“You are going to Brussels without Serbia apologising for war crimes,” Tahiri said, referencing past statements made by Kurti, in which he said a negotiating team should be formed only after an apology from Serbia.

Earlier in the session, Kurti had called for unity on issues of foreign affairs, especially in regard to EU-facilitated dialogue with Serbia, expected to resume again next month. “We can disagree on many matters but let’s try to agree on the dialogue with Serbia,” he said.

However, the prime minister added that much of the work he had been set in the dialogue was correcting mistakes of the past.

“Let’s not forget that you were in power for 20 years, and have left a legacy to us,” Kurti said, citing the agreement to form the Association of Serb-majority municipalities and discussions over territorial modifications as issues he needs to address.