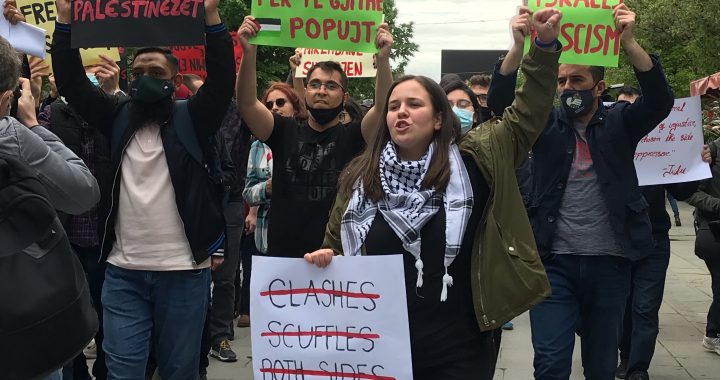 A march was held in Prishtina on Friday, with demonstrators voicing support for the Palestinian people following the recent violence in the Middle East.

Demonstrators expressed their solidarity with the people of Palestine at a protest in Prishtina on Friday, which was organised by the Collective for Feminist Thought and Action. Dozens of protestors marched through downtown Prishtina chanting: “Free Palestine!”, “Stop killing children”, and “Stop Israeli fascism.”

As the march reached Skanderbeg square, Gazmend Qyqalla, a human rights activist, denounced what he described as a policy of ethnic cleansing in Jerusalem, as well as recent attacks on Gaza. Qyqalla added that he believed there was a “moral duty to oppose fascism.”

Liridona Sijarina, one of the organisers of the protest, told Prishtina Insight that recent violence exerted by the state of Israel on the people of Palestine was unacceptable, adding that human rights should be viewed as fundamental for all people.

Shkelzen Gashi, a renowned activist who participated in the protest, compared the “drastic violation of Palestinians’ human rights” to those experienced by Kosovo Albanians during the 1990s. He added that Kosovars should not be silent on these issues, despite diplomatic ties being established between Kosovo and Israel earlier this year.