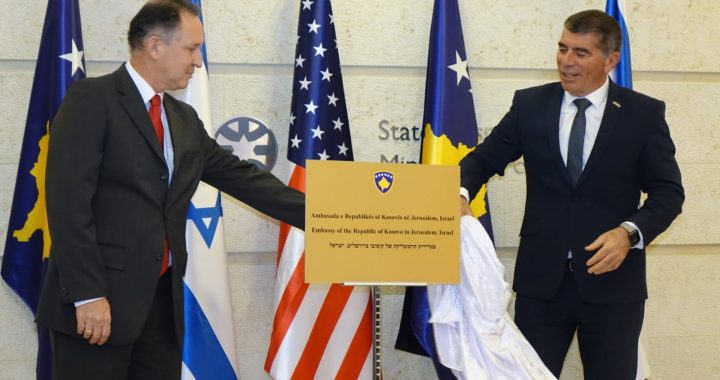 An EU spokesperson has reiterated to Prishtina Insight that the Union expects Kosovo to act in line with its commitments in the Middle East after a plaque was unveiled in Jerusalem on the future site of Kosovo’s embassy to Israel.

On Monday, Kosovo and Israel celebrated the establishment of diplomatic relations in an online ceremony, which included the unveiling of a plaque on the future site of Kosovo’s embassy to Israel in Jerusalem.

During the ceremony, Israeli Foreign Minister Gabi Ashkenazi stated that he had already approved an application to open the Kosovo embassy, while some reports have suggested it may be operational as early as March.

The establishment of diplomatic relations between the two states are the result of agreements reached in Washington DC in September between Kosovo, Serbia and the Trump administration. However, the decision for Kosovo to open its embassy in Jerusalem was widely criticised at the time, including by Turkey, the Arab League and the European Union.

Peter Stano, the EU’s spokesperson for external affairs, reiterated that criticism to Prishtina Insight on Monday, highlighting that all EU member states’ embassies to Israel were located in Tel Aviv.

“The EU position on moving embassies to Jerusalem is clear: In line with UN Security Council resolution 478, which called on all UN members to move their embassies to Tel Aviv, all EU member states’ embassies, as well as the EU delegation to Israel are located in Tel Aviv,” he said.

Stano went on to say that the EU has a firm commitment to a negotiated and viable two-state solution, and that a way must be found to resolve the status of Jerusalem as the future capital of both states. He added that the Union expects Kosovo to act accordingly or risk undermining its European perspective.

“Kosovo has identified EU integration as its strategic priority,” Stano said. “The EU expects Kosovo to act in line with this commitment so that its European perspective is not undermined.”

In January, Miroslav Lajcak, the EU’s Special Representative for the Kosovo-Serbia dialogue, stated that the agreements reached in Washington had “pushed Kosovo further away from a European future, as they did not meet European standards.”

Butrint Berisha, a research analyst at the Prishtina Institute for Political Studies told Prishtina Insight that Kosovo’s position on opening an embassy in Jerusalem is one of the very few cases that it has not complied with the EU position.

“The EU has made it clear that it would consider establishing and moving the Kosovo and Serbia Embassies in Jerusalem, as counter to its position on this issue,” he said.

However, the analyst believes that this diversion from EU policy was necessary for Kosovo in order to achieve recognition from Israel, the first country to recognise Kosovo as an independent state since Barbados in 2018.

“Given the circumstances under which the Kosovo-Israel recognition came to fruition, I think that it is quite clear that the location of the Embassy was the lynchpin of this process,” Berisha said. “For Israel the recognition would only make sense if Kosovo’s Embassy would be located in Jerusalem, whilst for Kosovo the only way to receive a new recognition in nearly three years, was through agreeing to open the Embassy in Jerusalem.”

In the Serbian version of the agreements signed in Washington, Belgrade promised to open an office of the Chamber of Commerce and a state office in Jerusalem, and to transfer its embassy there by July 1, 2021.

However, in the months since Serbia has sent mixed signals. In September 2020, President Vucic’s media adviser, Suzana Vasiljevic, told Prva Television that the embassy decision was “not final.”

“That was discussed… The next steps will, of course, be discussed and it all depends … on Israel’s actions after that,” Vasiljevic said. “We have not accepted anything so far, nothing has been signed,” she said. “We will see how the situation develops and how Israel will behave in the future when it comes to their relationship with Kosovo.”