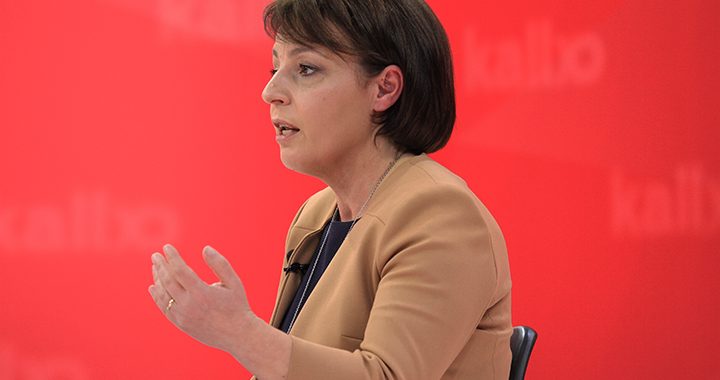 In an exclusive interview for BIRN, new Minister for Foreign Affairs Donika Gervalla outlined her plans to restore Kosovo’s international image and discussed her stance on key foreign policy issues, including the Kosovo-Serbia dialogue.

Newly appointed Minister of Foreign Affairs Donika Gervalla has told BIRN that her first week in the job has given her hope of restoring Kosovo’s ailing foreign service.

In an exclusive interview broadcast on Wednesday night, she said that she had met many talented professionals within the ministry, who she says were “pushed by the former leadership to take certain actions against their will.”

For Gervalla, one of the first steps towards repairing Kosovo’s international image is reforming the diplomatic corps. She pointed to frequent violations of the law on the diplomatic service, which states that 50 percent of ambassadors and heads of mission should be recruited from serving members of the foreign service.

According to the new minister, only around 30 percent of ambassadors have been recruited from the foreign service, with the remaining 70 percent appointed due to political affiliations.

She added that this has damaged Kosovo’s international reputation, stating that the country’s political establishment is “not taken seriously by countries throughout the world.”

Gervalla has long been a critic of the pledge made by the previous Kosovo administration in Washington DC agreeing to a one-year moratorium on applying to international organisations – something she says will be discussed with US Ambassador to Kosovo Philip Kosnett.

“The pledge made in Washington is a terrible violation of Kosovo law,” she told BIRN. “You cannot pause the integrity and constitutionality of a country in any situation. We are not an experiment, we are a sovereign state.”

Gervalla added that she will always represent Kosovo’s interests in her new role, and will not tolerate behaviour similar to that employed by Richard Grenell, the former US Presidential Envoy for Kosovo Serbia Dialogue.

“I am certain that if [other] Grenells come and request things like in the past, I will find ways and instruments to stop these methods,” she said.

The new minister was more amenable to other elements of the agreements made in Washington DC, however, and has no plans to reverse the decision to open a Kosovo embassy in Jerusalem, a move which has been criticised by both the EU and Turkey.

“I think that the issue of our embassy in Israel is closed,” she said. “We will not enter into diplomatic adventures over an issue that is ‘job done.’”

However, the minister added that Kosovo’s foreign policy in the Middle East should be cordial towards all parties. “Kosovo is a small country and will seek partnership with Israel, but we want amicable relations with the Palestinian authorities as well,” she told BIRN.

Gervalla, the daughter of Kosovo Albanian dissident Jusuf Gervalla, who is suspected to have been assassinated by the Yugoslav secret service in Germany in 1982, revealed that she also intends to be active in the Kosovo-Serbia dialogue as part of her new role.

In order to avoid repeating previous mistakes, the foreign minister believes that the new Kosovo government must not hurry into the EU-facilitated dialogue.

“We want to be prepared for the dialogue, not for it to be done superficially so that European bureaucrats can register that ‘the meeting was held and some promises were made,’” she said, adding that previously both Kosovo and Serbia did not take obligations made in Brussels seriously.

Gervalla also listed battling Serbia’s derecognition campaign as one of her three main priorities, alongside developing relations with countries that have already recognised Kosovo and focusing on the five EU member states yet to do so.