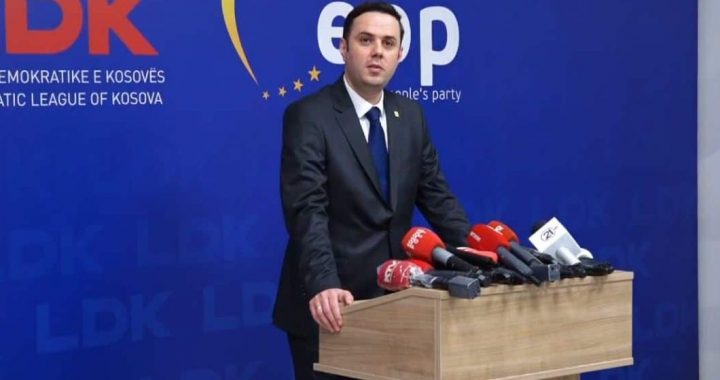 The opposition Democratic League of Kosovo, LDK, pledged on Tuesday to take part in a vote in parliament on a new president, most likely former LDK member Vjosa Osmani.

After a meeting with LDK MPs, party leader Lumir Abdixhiku said that the party would take part in an upcoming vote in Assembly on Kosovo’s next president, with former assembly speaker Vjosa Osmani widely seen as the frontrunner.

Osmani, a former member of the LDK, took over the role in an acting capacity after Hashim Thaci resigned on November 5 to face war crimes charges at the Kosovo Specialist Chambers in The Hague.

Osmani ceded the acting position last week to Glauk Konjufca when he was voted in as speaker of the parliament following a landslide electoral victory for the Vetevendosje party, of which Konjufca is a member, in mid-February.

The presidency can only be held in an acting capacity for up to six months; with the government of Vetevendosje leader Albin Kurti taking office on March 22, attention has shifted to whether the LDK – fresh from a devastating result in the February election – would take part in the vote to elect a new president.

According to the rules, 80 of parliament’s 120 MPs must be present for the vote to be valid.

“LDK will not obstruct the election of the country’s president,” Abdixhiku said on Tuesday. “As always, LDK will carry out its constitutional obligation and participate in the voting process for president without prejudicing the vote of MPs.”

The LDK, which led a decade of passive resistance to Serbian rule in the 1990s, has 15 MPs in parliament after taking just 12 per cent in the February 14 election, the worst result in the party’s history.

Prior to meeting with his MPs, Abdixhiku convened the party presidency on Monday. He said a majority of members had voted in favour of taking part in the parliamentary vote on the president.

“I expect each MP will respect the decision of the majority and not hinder the new course of LDK toward our original comeback,” he said.

Osmani was dismissed as deputy leader of the LDK in June 2020 when she refused to support the then LDK-led government of Avdullah Hoti.

The acting president signed up to Vetevendosje’s election ticket, taking the most votes of any candidate in the country – over 300,000.

The LDK’s traditional rival, the Democratic Party of Kosovo, PDK, and the Alliance for the Future of Kosovo, AAK, have both said they will not back Osmani for president. The Srpska Lista party, which represents Kosovo’s ethnic Serb minority, has yet to say which way it will vote.

If parliament fails to elect a president after three attempts snap parliamentary elections must be held within 45 days.