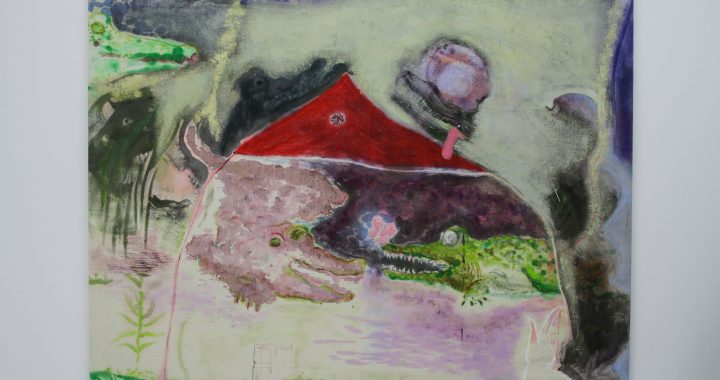 LambdaLambdaLambda, a small contemporary art gallery in Prishtina, is currently hosting a group exhibition titled ‘Nothing Like Home’ that features works by a new generation of Kosovo artists.

The exhibition is named after a painting by Brilant Milazimi, which takes up the majority of one of the gallery’s four walls. Two lurking, open-mouthed crocodiles dominating the centre of the painting create a sense of unease, in an apparent metaphor for those occupying power in Kosovo.

Milazimi is one of the four co-founders of the Hap collective, who all have work on display at the exhibition. The collective formed during their studies at the Faculty of Arts at the University of Prishtina, with the aim of addressing social issues and responding to contemporary events in Kosovo.

Another of the collective’s founders, Valdrin Thaqi, is exhibiting his award winning work ‘Pondering’, an installation in which a mechanical hand slowly ‘counts’ Tespih beads, which are often used in Islamic rituals to glorify God.

Thaqi tells Prishtina Insight that the work was intended to explore dilemmas created by artificial intelligence and machine learning. “I had the idea after watching a documentary on self-driving cars,” he says. “In the case of self-driving cars, in sudden situations the machine would have to decide either to save the passenger or the pedestrian.”

‘Pondering’ distills this clash between morality and technology into what he describes as an “absurd installation using two opposite materials.”

“The gesture of the person, meditatively counting the prayer chain, is taken over by a machine that pushes the beads every second,” he says.

Another highlight of the exhibition is provided by a long term collaborator with the Hap collective Blerta Hashani, who contributes a series of abstract miniatures created during the early days of the coronavirus outbreak in Kosovo.

“My inspiration was from the minimalist environment when I was quarantined,” she tells Prishtina Insight.

Hashani’s often abstract works are regularly overlaid with scraps of paper containing scrawled lines which seem to be attempting to communicate, but the artist dismisses the notion that these constitute ‘writing.’

“It can not be called writing,” she says. “It is a line with a free hand, like a child’s hand making lines without thinking about what the hand does.”

Katharina Schendl, one of the co-founders of LambdaLambdaLambda, tells Prishtina Insight that the exhibition, which opened in February, has been received very well and attracted lots of visitors.

Nothing Like Home will remain open until April 10 for those still wishing to attend. In line with measures to prevent the spread of the novel coronavirus, visitors are required to wear a mask and a limited number of guests are allowed in at any one time.