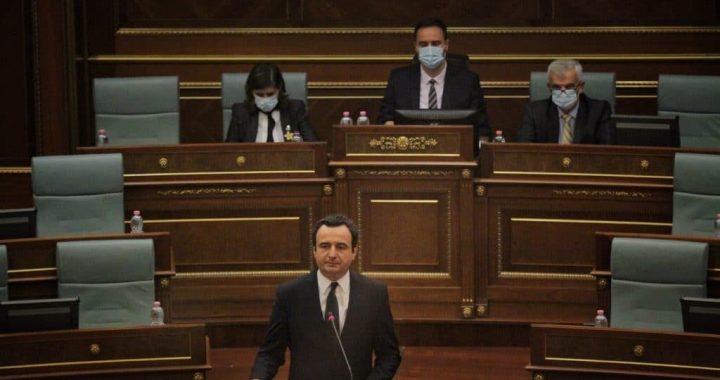 Ahead of a parliamentary vote to choose a new president, Kosovo’s biggest party Vetevendosje tabled a surprise motion to change the country’s electoral law, suggesting that snap elections could be looming yet again.

The election of Kosovo’s next president took a new twist on Friday when the Vetevendosje parliamentary group called a meeting of the parliamentary presidency to examine a request to amend the Law on Elections, suggesting that new snap polls might be on the horizon, less than two months after Kosovo’s last elections.

Vetevendosje, which has the most MPs in the Kosovo parliament, unexpectedly tabled a motion to amend the Law on Elections to enable members of Kosovo’s diaspora to vote at embassies abroad, instead of by post. In the snap parliamentary elections on February 14, Vetevendosje received more than 75 per cent of the votes cast from abroad.

After its victory at February’s elections, Vetevendosje has been backing Vjosa Osmani as its choice for president – a role that is decided by MPs’ votes in parliament. But, according to the Kosovo Constitution, 80 of parliament’s 120 MPs must be present for the vote on the presidency to be valid, and questions have been raised about whether the opposition Democratic League of Kosovo, LDK, might try to block Vetevendosje’s choice by not turning up for the vote.

A few days ago, the LDK announced that it will take part in the vote, but local media have reported that the quorum still stands in the balance because three LDK MPs are not sure whether they want to make possible the election of Osmani, who left the LDK last year and ran on the Vetevendosje candidates’ list in February’s elections.

Another potential obstacle is that for the vote to be valid, two or more candidates must run for the post. To tick this box, Vetevendosje has put forward its own rival to Osmani.

The opposition Democratic Party of Kosovo, PDK, said it did not support the Vetevendosje initiative to amend the electoral law.

“We do not agree that this very important issue should be addressed with such urgency,” said Bedri Hamza, head of the PDK parliamentary group.