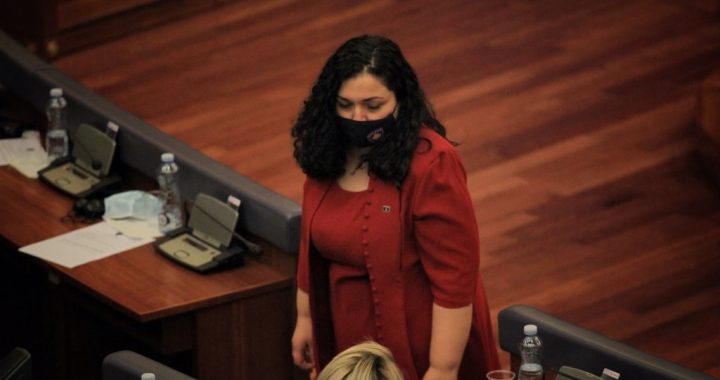 Two attempts to conduct the first round of voting to elect Kosovo’s next president have failed to reach the constitutionally required quorum, as opposition MPs boycott the ballot.

Efforts to elect Vjosa Osmani as Kosovo’s next president looked to be faltering on Saturday night as the first two attempts to conduct a ballot at the Kosovo Assembly failed to reach the constitutionally required quorum of 80 MPs, after the ballot was boycotted by opposition MPs and MPs representing Kosovo’s ethnic non-majority communities.

The first attempt at a ballot saw 78 MPs participate, while the second reached 79, one short of making the vote legally valid. After the second attempt to conduct the first round of voting failed, Speaker of the Assembly Glauk Konjufca called for a thirty minute recess. More than 90 minutes later, Konjufca announced that the session would resume at 17:00 on Sunday.

PDK have repeatedly stated that the party would not participate in a vote for Vjosa Osmani as president, with acting party leader Enver Hoxhaj claiming she was a “divisive figure.”

Speaking before the vote on Saturday, Hoxhaj stated that PDK has principled reasons for not supporting Osmani as president.

“She is not a unifying figure, she is a party president,” Hoxhaj said before leaving the Assembly hall. “Mrs. Osmani is being appointed by Mr. Kurti as he wants to have control over institutions. What is happening does not resemble democracy but an autocracy.”

AAK leader Ramush Haradinaj also stated on Saturday evening that the party would not take part in the session as the election of Osmani would hand too much power to a single entity. However, one AAK MP, Albena Reshitaj was present at the Assembly during the session and participated in the voting.

Despite AAK and PDK’s boycott, the vote could still reach quorum with the participation of Vetevendosje and LDK’s parliamentary groups, alongside the MPs representing Kosovo’s non-Serb ethnic non-majority communities.

However, relations between Vetevendosje and LDK were put in jeopardy on Friday, after Vetevendosje’s parliamentary group attempted to pass a draft law amending the Law on General Elections ahead of the presidential ballot.

The move received fierce criticism from opposition parties, with LDK threatening to pull out of the vote for president if the amendments were not withdrawn. A motion on whether the law should be passed through an accelerated procedure was put to the Assembly late on Friday night, but failed to gain the required backing of two thirds of MPs.

The amendments were officially withdrawn 45 minutes before the parliamentary session in which the vote on the president was scheduled.

The session, which began more than 90 minutes later than the scheduled time, looked set to be a success after the entirety of LDK’s parliamentary group arrived at the Assembly hall.

Kosovo’s Constitution states that failure to elect a president in the third round leads to the Assembly being dissolved and elections held within 45 days. The Kosovo Assembly is also constitutionally obligated to appoint a successor to Hashim Thaci 30 days before the end of his current mandate, a deadline which expires on Monday, April 5.

US Ambassador Philip Kosnett echoed the sentiments. “We support an Assembly vote for President,” he said. “We call on all members of the Assembly to fulfill their responsibilities to the people of Kosovo by participating in the vote to ensure a quorum.”