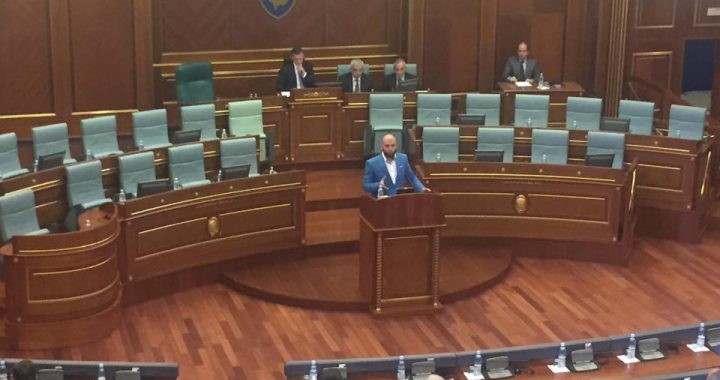 Responding to the arrest of Thaci, the director of the police region of southern Mitrovica, the Kosovo Assembly met late Tuesday afternoon to discuss his detention by Serbian authorities since September 28.

Thaci was arrested as he crossed the border from Kosovo to Serbia at Dheu i Bardhe crossing on allegations of terrorism and war crimes, however his charges have changed since to organized crime. Thaci is accused of intimidating a Serbian family in Lipjan, Kosovo to leave their home after the war.

The extraordinary session on October 11 was called by Gezim Kelmendi, an independent MP, who opened the discussion although only 40 MPs were in the room. Requesting Thaci’s immediate release, Kelmendi also asked his fellow MPs to say “enough is enough” to Serbia, and calling for an end to the ongoing Kosovo-Serbia dialogue.

“Let’s remember that his arrest is not the first one and let’s hope that it’s the last. Based on Serbia’s warrants, two former prime ministers have been detained,” said Kelmendi.

“Belgrade must not forget that we’re the victim and they are the aggressor. I’m asking where are we? Why are we silent? It’s the last time we must tell Serbia, enough! I propose to come up with a resolution, together with recommendations. I propose that the first recommendation must be the immediate termination of the dialogue with Serbia.”

The debate continued until early in the evening with governing coalition and opposition MPs disagreeing on whether the resolution should include a demand of Thaci’s release by conditioning it to the continuation of the Brussels-mediated dialogue with Serbia.

Responding to the debate and inquiries from MPs, Kosovo Prime Minister Isa Mustafa and members of his cabinet also addressed the parliament on Tuesday evening.

“We are in an uncomfortable situation,” said PM Mustafa. “We consider Nehat Thaci’s arrest to be political.”

However, the prime minister added that they would not cease the dialogue with Serbia.

“We have many unsolved issues that are conditioned by the dialogue. We have the Stabilization Association Agreement which conditions the dialogue’s continuation,” said Mustafa.

Due to lack of quorum and numerous disagreements, the MPs withdrew in the early evening to “harmonize” their requests into a resolution.

The extraordinary session was continued on Wednesday. Unable to harmonize their stances in a single resolution, the parties of the governing coalition PDK and LDK, including the minority MPs from the 6+ group, proposed a six point resolution which demanded the immediate release of Thaci, the direct involvement of the European Union and the EULEX mission in mediation about the issue, and Kosovo’s admission into Interpol, the international policing body.

The resolution also demanded that “the government notify the EU that such actions by Serbia threaten the improvement of relations.”

Daut Haradinaj, an MP from the Alliance for the Future of Kosovo, AAK, proposed a second resolution signed by Kelmendi and other MPs, which also included the demand that “the Kosovo government halts dialogue until the release of Nehat Thaci.”
The six-point resolution passed by a majority vote with 51 for, 13 against and 8 abstentions.