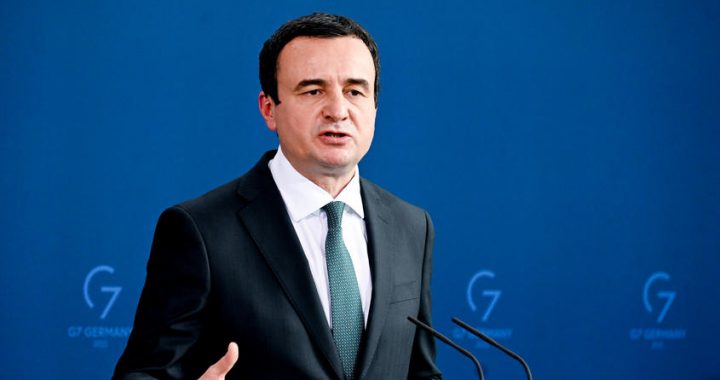 Prime Minister of Kosovo Albin Kurti speaks during a press conference with German Chancellor Olaf Scholz (unseen) at the Chancellery in Berlin, Germany, 04 May 2022. Kurti and Scholz met for bilateral talks. EPA-EFE/FILIP SINGER

Albin Kurti expressed disdain on Thursday about an energy deal suggested by Serbia’s Aleksandar Vucic in which lignite coal from Kosovo could be exchanged for electricity.

“This is an attempt by the authoritarian president of Serbia to move from the failed project of a territorial exchange to this one of a coal exchange,” Kurti told media.

During the Open Balkan summit in Ohrid, North Macedonia on Wednesday, Vucic had told media about plans to offer an agreement on purchasing lignite coal from Kosovo or exchanging it for electricity. The controversial idea of a territorial exchange to help normalise relations between Serbia and Kosovo was mooted in recent years but attracted strong criticism.

Vucic said that Serbia was “ready to offer Pristina an exchange in order to receive a considerable amount of quality lignite in exchange for electricity”.

He added that “if you do not want it this way, then it can also be done with money”.

Representatives of Kosovo did not attend the Open Balkan summit as the country refuses to join the recently-established Western Balkan countries’ mini-bloc. Only Serbia, Albania and North Macedonia are involved in the initiative so far.

Explaining Kosovo’s stance, Kurti said that his country would not be involved as the six Western Balkan countries are not “equal”.

“Our readiness for and interest in regional cooperation is expressed via our support for the [EU’s] Berlin Process [economic cooperation initiative] and our engagement in the Common Regional Market,” Kurti told media.

Kurti called on Serbia to open up to Kosovo first by recognising its identity documents such as passport and ID cards, before offering “alternative initiatives” such as the Open Balkan initiative or deals on energy exchanges.

“In order to have Open Balkan, let Serbia be open for Kosovo and closed for the Russian Federation and other autocracies,” Kurti said, a reference to Belgrade’s refusal to join EU sanctions on Russia over the war in Ukraine.

He also urged Vucic to recognise that massacres were committed by Serbian forces during the 1998-99 Kosovo war, such as the Racak massacre of January 15, 1999, which Vucic denied last year.

Kosovo and Serbia are engaged in long-running negotiations facilitated by the EU, and are currently discussing a possible solution on a license plates dispute and on energy supplies in the Serb-majority north of Kosovo. The Serb-dominated municipalities in the north of Kosovo do not pay for electricity as they are not in the Kosovo billing system.

BIRN contacted Kosovo government to ask whether Vucic’s offer could become part of a potential energy agreement and on the status of the negotiations, but did not receive answers by the time of publication.