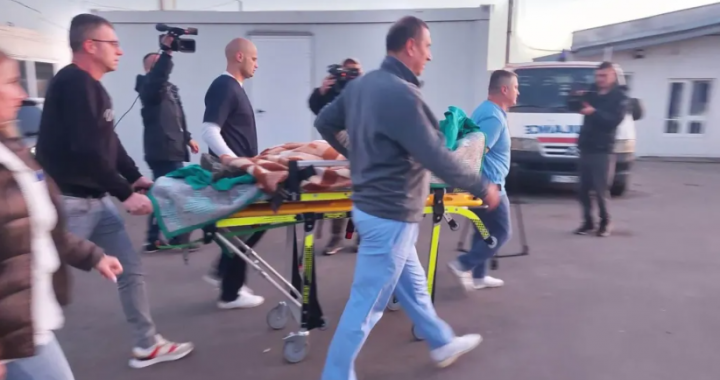 One of the injured in Shterpce being transported to Gracanica hospital. Photo: Gracanicaonline.info

A suspect was arrested after a man and a boy were injured in a drive-by shooting near the eastern Kosovo town of Shterpce and officials confirmed that a member of the Kosovo Security Force was involved in the incident.

Kosovo police said that a 33-year-old man with the initials A.K. was arrested as a suspect on Friday after two Serbs – Stefan Stojanovic, aged 11, and his relative Milos Stojanovic, aged 21 – were injured in a drive-by shooting near the town of Shterpce.

Defence Minister Armend Mehaj said that a member of the Kosovo Security Force was involved in the incident but insisted that “security and justice institutions are dealing with the case”.

“I express the deepest regret for what happened in Shterpce. I wish those who were injured a speedy recovery,” Mehaj said.

After the incident, which happened on Orthodox Christmas Eve, local Serbs blocked the road to Shterpce, while Serbian officials reacted angrily.

Police confirmed that a weapon which is suspected to have been used in the incident was confiscated along with the car the suspect has used.

The injured Serbs were transferred to Gracanica hospital for treatment, where surgeon Bosko Odalovic told media that both were admitted with gunshot wounds. He said that they underwent surgery and their condition was stable.

Kosovo Prime Minister Albin Kurti condemned the shooting incident and wished the two victims speedy recovery. He said that the arrested suspect “should and will face justice”.

“Relevant units will continue their investigations until light is shed on the circumstances of this unacceptable and condemnable act,” Kurti said.

“I want to ensure all citizens that the Kosovo Police are fully committed to performing their duties in order to protect the lives and property of all citizens without any distinctions,” he added.

But Serbia’s Prime Minister Ana Brnabic said that “even on the Orthodox holy night, Serbs in Kosovo are not safe”.

“I condemn in the strongest possible terms this vicious crime and request the international community to act immediately and bring those culpable to justice. This is another in a series of dreadful incidents demonstrating the gravity of the conditions in which Serbs in Kosovo and Metohija are living every day,” Brnabic wrote on Twitter.

Zvonimir Stojanovic, the father of one of the injured, said that he did not know all the details of what happened but that it was important that the doctors had told the family that the victims are stable.

“We are waiting for the relevant services to do their job,” Stojanovic said in front of Gracanica hospital, where he was waiting for news about his son and cousin’s conditions.

Condemning the shooting, the OSCE Mission in Kosovo said that “there has to be zero tolerance for such acts of violence”.

“We condemn in the strongest terms the drive-by shooting near Strpce/Shterpce earlier today, in which two people were injured. Swift Kosovo Police action in arresting an alleged perpetrator is welcome and must be followed up by those responsible being brought to justice,” the OSCE said in a statement.