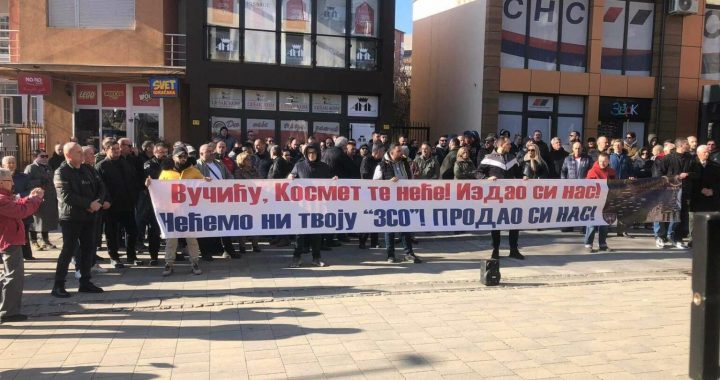 Serbs in North and in Shtërpcë Stage Protests

Shtërpcë Serbs protested over the wounding of two youngsters on Friday while Serbs in the north protested against the Serbian President’s ‘treason’.

Serbs in northern Kosovo and in Shtërpcë in the south held separate protests, with different goals, on Sunday.

In mainly Serbian North Mitrovica, protesters denounced the “high treason” of Serbian President Aleksandar Vucic, and “torture of the Serbs and the occupation of the north”, by the Kosovo Prime Minister, Albin Kurti.

About 200 citizens gathered in front of the building of the largest party of Serbs in Kosovo, Serbian List.

They held a placard: “Vucic, Kosovo does not want you. You betrayed us. We don’t even want your [municipal] Association. You sold us!”.

One of the organizers, Ivan Miletic, said that during the recent erection of  barricades in the north of Kosovo, they believed that President Vucic would stand behind them, “but this did not happen”.

He also said that the Belgrade-backed Serbian List party no longer represented local Serbs, because its fate was decided by failed businessmen and politicians.

Local Serbs have still not made peace with Kosovo’s unilateral declaration of independence in 2008, and the protesters voiced dissatisfaction with Belgrade’s alleged inaction as well.

Miletic called on Kurti and the international community to withdraw all Kosovo special police from the north and close all bases as well.

UN peacekeepers mobilized in the north of the country after extreme right-wing groups protested on the Serbian side of the border.

Barricades went up on the roads  in the four northern municipalities leading to the Kosovo-Serbia border points in December.

However, on Vucic’s advice, Serbs removed the barricades after an arrested policeman, Dejan Pantic, was moved from detention to house arrest.

The former Kosovo policeman was arrested on suspicion of having carried out an attack on the offices of the Central Election Commission in the north.

Serbs protest in Shtërpcë over wounding of two youngsters

Serbs also held a protest in Shtërpcë, two days after two young men were injured in a drive-by shooting.

Protesters carried placards such as: “Sterpca is the heart of Serbia” and “We only want peace”.

The head of Serbian List, Goran Rakic, told the protesters that “times are difficult, because at the head of Kosovo’s institutions is a man blinded by hatred, with whom one cannot negotiate”.

“His goal is to create such conditions for Serbs to leave their homes,” said Rakic.

The mayor of Shtërpcë, Dalibor Jevtic, said the Serbs will neither be afraid nor surrender, and that “Serbs want to stay in their country”.

On January 6, two young men, one aged 11 and the other about 21, were injured by gunshot in the village of Drajkovc in the municipality of Shtërpce.

Police said they were shot by a suspect from a vehicle, which was traveling from Shtërpca in the direction of Ferizaj.

The Basic Court in Ferizaj has ordered the suspect with the initials A.K. to be detained for a month for injuring two persons on January 6 in Shtërpcë.

The court said the suspect was driving his car and reached the entrance of the village when he noticed some citizens at the end of the road and in order to drive them away, he blew his horn. Unable to move them, he stopped the car and after a verbal dispute, took out a revolver and shot twice, hitting the injured.

The court assessed that there is a reasonable suspicion that A.K. has committed three criminal acts.