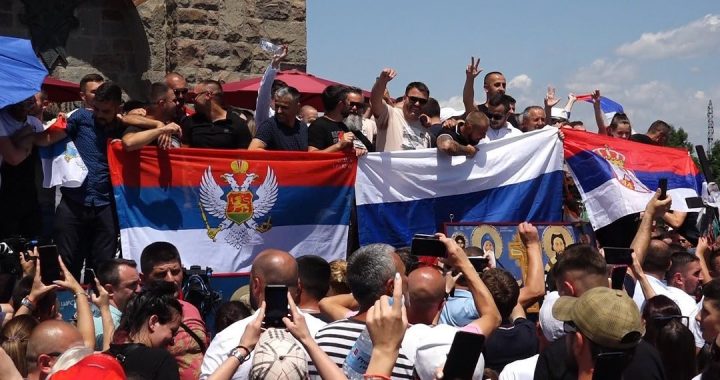 Police arrested one person and turned back several other Serbs from Gazimestan for wearing shirts with nationalist inscriptions.

Some five kilometers from the capital of Kosovo on Tuesday, many Serbs from Kosovo and Serbia observed the Orthodox Church holiday of Vidovdan, or St Vitus Day.

However, police arrested one person for inciting hatred and several Serbs were turned back for wearing provocative shirts, featuring the map of Kosovo and the four letters “S”.

At the Gazimestan memorial in Obiliq, many Serbs celebrated by singing Serbian nationalist songs and wearing symbols and, after the ceremony started, raising Serbian and Russian flags and shouting “Kosovo is Serbia”.

During the check-in of luggage of their vehicles, several shirts with hate speech inscriptions were found by police. Prosecutors were contacted on the cases, by whose decision the persons in question were denied entry. Some clothing with various inscriptions was confiscated, according to the police.

Serbs mark June 28, St Vitus Day, as the anniversary of the Battle of Kosovo in 1389, when Serbian Prince Lazar took on the might of the invading Ottoman Empire, which Serbian history recognizes as its spiritual victory, despite Lazar’s defeat and death. The battle led to the loss of Serbian independence for more than four centuries.

Kosovo Police had prepared an operational plan for managing the security situation, before, during and after the holiday.

Last year, a Montenegrin was arrested and given several months in prison for interethnic provocation. He was also found with a weapon.