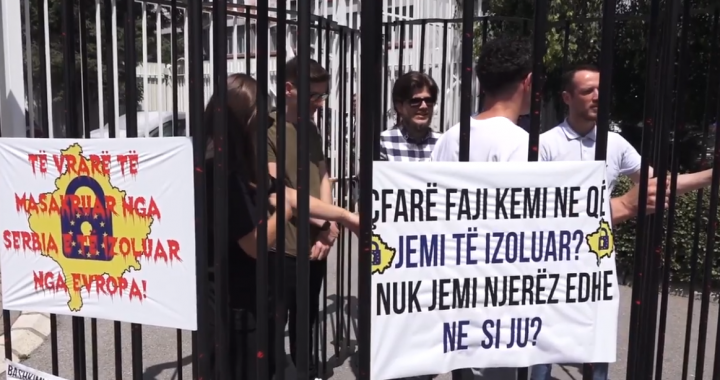 Activists from the "Movement for Democracy" on Friday improvised a prison in the shape of a map of Kosovo in front of the European Union Office in Pristina. Photo: BIRN

Activists from the Movement for Democracy on Friday improvised a prison in front of the European Union Office in Pristina as a sign of anger over Kosovo’s continued isolation.

With the motto “What fault do we have that we are isolated? Aren’t we people like you?” activists from the Movement for Democracy group last Friday improved a fake prison in front of the EU office in the capital to symbolize the isolation of Kosovo as a result of the EU’s failure to offer visa liberalization.

A representative of the organization, Megjid Ramusa, said the action was done to remind the EU that an entire population is being kept isolated.

“Through this activity, we want to show the EU that it is keeping us unjustly isolated. It is not our fault that we remain isolated,” he added.

Ramusa said the same type of activity with the improvised prison would be repeated in front of the EU office in Brussels as well.

“The [Kosovo] government has done its job, we have met all the criteria, it remains only for the EU to give us the green light. As soon as we arrange the visas, we will also go to Brussels with this type of activity,” Ramusa said.

Ramusa said that if the EU promotes democratic values, the question is why it takes such a position towards only one country.

Kosovo is the only country in the Western Balkans whose citizens must apply for a visa if they want to travel to Europe.

In 2018, the European Commission concluded that it had met all the criteria for visa liberalization.

The Commission continues to maintain this position, but some EU member countries, such as France, still express reservations about the free movement of Kosovars.

The EU-Western Balkans summit of June 23 raised hopes of a potential breakthrough  but the topic did not even make it to the agenda.