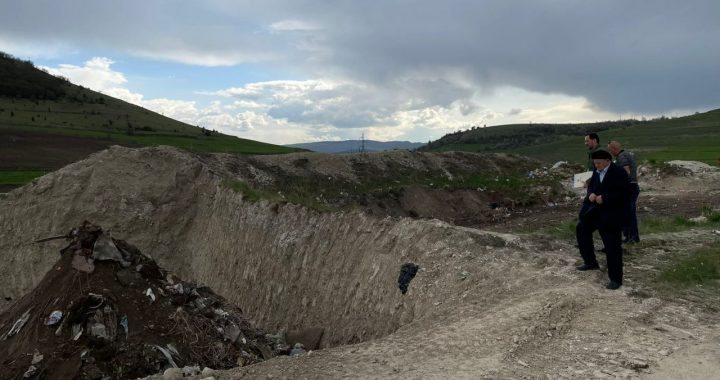 Experts and family representatives observe excavations near the Stavalj mine on Tuesday. Photo: Kosovo Government Commission on Missing Persons.

The Kosovo government said it needs more satellite images of a suspected mass grave site in southern Serbia to determine whether a search for buried bodies that was halted by the Belgrade authorities should continue.

The Kosovo government told BIRN that more satellite images are needed of the Stavalj mine near Sjenica in south-west Serbia, where Kosovo Albanian victims of the Kosovo war are suspected to have been buried, in order to reach a definitive conclusion about whether excavation work at the site should continue or stop.

Excavations at the Stavalj mine for human remains from the Kosovo war were halted this month, 13 days after they started. The Serbian government’s Commission for Missing Persons said on May 25 that no war victims’ remains were found.

The Kosovo government criticised the decision to halt the excavation work. The Kosovo prime minister’s office blamed Serbia for not cooperating with the search by not providing additional information from its archives.

But Veljko Odalovic, the head of Serbia’s Commission for Missing Persons, told Kosovo Online on May 25 that “more than 7,000 cubic metres of loose earth were removed from the site and every square metre that was suspected to be a potential grave was searched”.

The Kosovo government’s Commission for Missing Persons currently has satellite images of the Stavalj mine covering the end of May and beginning of June 1999, but says that images covering a wider time period are needed.

Kelmendi said the Kosovo commission has been in contact with international institutions in an attempt to obtain additional satellite images.

The EU rule-of-law mission in Kosovo, EULEX, whose forensic experts assist in excavations, told BIRN that such images can be requested via the International Committee of the Red Cross from “international satellite centres” such as the European Union Satellite Centre, SERC, or from “military institutions like NATO or the US Army operating in the area of interest at the time”.

Such material is usually classified and difficult to obtain, however.

The Kosovo government has also repeatedly called on Serbia to open its military archives from the 1998-99 war in order to help clarify the fate of the remaining missing persons.

The International Committee of the Red Cross, ICRC, has chaired the Working Group on Missing Persons since 2004 and acted as an intermediary between Kosovo and Serbia ever since.

“It is crucial that all avenues are exhausted to identify any potential location where human remains could be found and then handed over to their respective families,” Beqiri said.