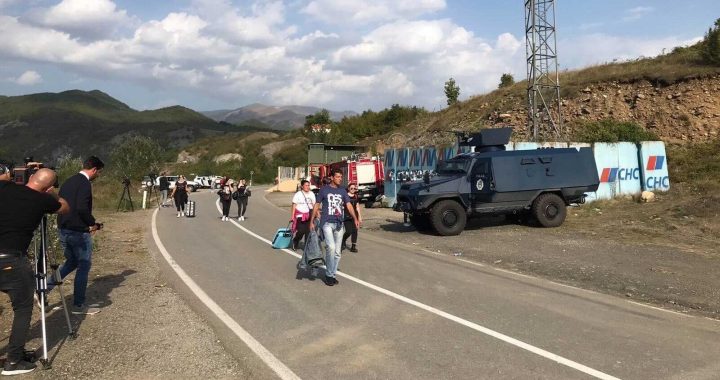 The Jarinje border crossing blocked by Kosovo Serbs and with the pressence of Kosovo special police forces in September 2021. Photo: BIRN/Valon Fana

An expert from North Kosovo said the test of the Kosovo-Serbia deal reached at the weekend on crossing borders with IDs will be how it works in practice.

It is “difficult to estimate when exactly implementation will begin”, Igor Markovic of the Mitrovica-based NGO Aktiv told BIRN about Saturday’s verbal agreement between Kosovo and Serbia on crossing borders using only IDs.

Serbia and Kosovo agreed that neither side will require any additional documents for border crossings, besides those that people already have, like IDs, it was announced on Saturday.

EU foreign policy chief Josep Borrell’s video statement from Saturday said the two sides agreed that citizens of both states will be able to pass the border freely with only the documents they have already.

“Under the EU-facilitated Dialogue, Serbia has agreed to abolish the entry/exit documents for Kosovo ID holders and Kosovo agreed to not introduce them for Serbian ID holders,” Borell said.

“Kosovo-Serbs, as well as all other citizens will be able to travel freely between Kosovo and Serbia using the ID cards,” he added.

The deal was the first time Albin Kurti and Aleksander Vucic had agreed on something more than 13 months since they first faced each other in Brussels.

However, the deal is only an oral agreement. Serbia’s President Vucic clarified on Sunday that this is “an oral agreement, the [previous] one in writing was made in 2011”.

There is also no official information either on implementation. However, Markovic said: “Implementation itself will not require the introduction of special administrative measures or new bureaucratic practices on the part of Serbia, which will significantly contribute to the earliest possible start of the implementation of the agreement.”

He added: “The question is whether Serbia will definitely start implementing the agreement in light of the still missing compromise on the use of plates with city designations in Kosovo.”

Judging by previous statements from Serbia, the precondition for the rapid implementation of the agreement on IDs will be an agreement on number plates, he said.

Serbian President Vucic confirmed on Sunday: “There is no agreement on the issue of plates”.

The latest crisis in relations was triggered by a June decision of Kurti’s Kosovo government to change the current regime on IDs and number plates.

But Markovic says the problem with number plates is largely symbolic.

“For the Kosovo side, the existence of Serbian number plates with markings of cities in Kosovo is a relic of the past and an attack on its sovereignty, while for the Serbian side, the continued use of these plates is a symbolic act of the [state] presence of Serbia in Kosovo,” he explained.

“Although [personal] documents are of exceptional symbolic importance, they are still not visible and present to the same extent as license plates,” he added.
In a meeting with his Vetevendosje party’s General Committee, Kurti defended the deal: “We are in a process of normalisation of relations [with Serbia] because our relations are not normal,” he said.
“We want to have normalization [of relations] and achieve this through a legally binding agreement centred on mutual recognition,” Kurti added on Sunday.
We will work hard and accept solutions and formulas which will be implemented by Kosovo the same way that symmetrically they will be implemented by Serbia,” Kurti continued.Kurti has scheduled a meeting with opposition leaders on Tuesday to inform them about his meeting in Brussels.
“It is not about what we will give and we will take, nor who wins and who is defeated. It is about being equal and our engagement is only toward this,” Kurti said.
At a press conference in Belgrade, Vucic assured Serbs that this was not a step towards recognition of Kosovo’s independence, declared in 2008, explaining that a disclaimer will be put up at the border which will say: “Enabling the use of identity cards issued by Prishtina (Kosovo) is done exclusively for practical reasons… It cannot be interpreted as recognition of the unilaterally declared independence of Kosovo.”
“We have been receiving their [Kosovo] documents until now, and they have been going through central Serbia with their documents since 2011, so we just issued, wasted, five minutes, issuing papers, and this way there will be a 3 [sqm] times 2 [sqm] big poster on which it is written that it is nothing of recognition or anything,” Vucic told the media.
The Kosovo government decided in June that every person presenting themself to cross the state border using personal IDs issued by Serbian authorities will now be issued temporary declaration forms valid for 90 days that replace the Serbian-issued document.
The decision reciprocates Serbian authorities’ non-recognition of Kosovo-issued IDs, introducing the same measure that Serbia implements towards Kosovo citizens since 2011.The changes announced by the Kosovo government triggered renewed tensions around a month ago when Kosovo Serbs set up barricades and Kosovo police closed the border crossings.
Vucic and Kurti discussed the issue at their unsuccessful meeting on August 18 but found no solution.
Milica Stojanovic and Perparim Isufi 29/08/2022 - 20:32