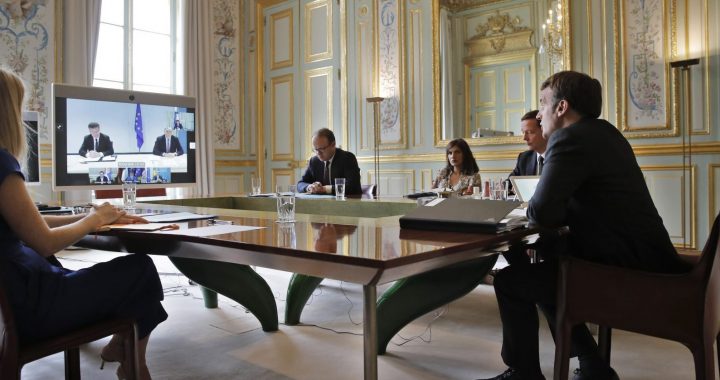 Serbia and Kosovo maintained their previous tough positions at the German-French-hosted virtual forum in Paris, ahead of the official re-start of EU-sponsored talks that were postponed to next week.

The official re-start of talks in Brussels between Serbia and Kosovo, scheduled for Sunday, has been postponed for next week after a German-French facilitated summit in Paris on the dialogue, seen as a precursor to the official restart of talks, did not yield much fruit.

In his speech, Hoti said the dialogue should be guided by the principle that the territorial integrity of Kosovo was non-negotiable, that its constitutional organisation would not be affected and that any agreement with Serbia must fully accord with the Kosovo constitution. Hoti said mutual recognition with Serbia was the only acceptable outcome of the dialogue for Kosovo.

He listed five objectives of the dialogue for the Kosovo side.

The other outcomes were Kosovo’s recognition by the remaining five EU countries that haven’t done so, UN membership and membership of “other international organisations, and the emergence of a clear opening of the European perspective for Kosovo”.

“Last but not least, missing persons [from the war in the 1990s] and victims of all forms of violence, war damages, casualties, are issues of our utmost concern in this process”, Hoti said.

After the meeting, Serbia’s President said it had been a “hard talk”.

“I said if this is the point of everything they want to talk about, everything is completely meaningless,” Vucic told journalists after the meeting, after he read Kosovo’s requests.

He also announced that the re-start of the dialogue, planned for Sunday, had been postponed for Thursday next week.

“Now everything has changed; we will have a video conference on Sunday, and the continuation of the dialogue is planned for Thursday in Brussels, with the participation of both delegations,” Vucic said.

The meeting came after another initiative to resume talks failed, when a planned meeting in the White House on June 27 was postponed.

This came after the Hague-based Specialist Prosecutor’s Office, SPO, issued an indictment for war crimes against Kosovo President Hashim Thaci, who was planning to represent Kosovo at the meeting.