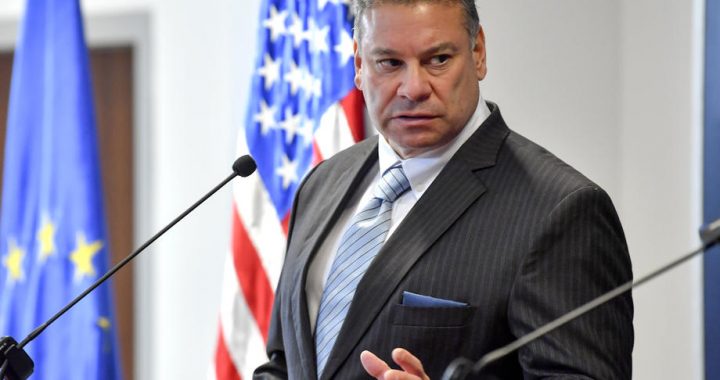 Kosovo-Serbia Talks May Advance ‘in Weeks’, US Diplomat Says

'Everybody needs to step up and create stability, not just in Europe but in the region,' Gabriel Escobar, US envoy on Western Balkans, said, urging a quick solution to long-lasting tensions between Kosovo and Serbia.

A United States diplomat said on Wednesday that Kosovo and Serbia have to reach an agreement which will see the two foes finding a way forward in their mediated dialogue, which is designed to normalize their tense relations.

Gabriel Escobar, US Deputy Assistant Secretary and US envoy for the Balkans, told Pristina-based Kanal10 TV on Thursday that the long-lasting EU-facilitated dialogue needs to come to a conclusion.

“I have heard European colleagues characterizing it as a matter of weeks and not years… for an agreement for the way forward. Beyond that, it is up to two parties and the facilitators to determine a timeline but it should be quick,” Escobar said, asked about the timeframe of a final agreement.

“Realistically, in the context of what is going on, everybody needs to step up and create stability not just in Europe but in the region as well. We would like to see Kosovo more aligned on the questions of regional stability and this is the way they can do it,” he added.

Speaking about mutual recognition between Kosovo and Serbia, which Kosovo is insisting on as the final outcome of the dialogue, the US diplomat hinted that for Kosovo it is more important now to secure recognitions from Romania, Spain, Slovakia, Greece and Cyprus, the five non-recognisers within European Union, four of which are also NATO members, in order to open the way for the country’s integration into Euro-Atlantic structures.

“At some point recognition [from Serbia] will likely happen, will have to happen, the question is the timing when the recognition happens. What is more important for Kosovo is that you start your path, a more sustainable path, to integration into international structures, including recognition by the five remaining [EU] non-recognisers. That’s more important than anything else you can get out of any process,” he said.

Assessing the situation in Europe as “dire” in the light of Russia’s invasion of Ukraine, Escobar said that Kosovo is an important partner and, “we want to make sure that we maintain unity with all our European partners on the way forward on what is happening on this continent”.

“There is new momentum on the dialogue and I think both Serbia and Kosovo have to take advantage of that especially in the light of what is happening in the rest of continent,” he added.

Speaking about new German-French proposal for an agreement between Kosovo and Serbia, Escobar said that the document which has reportedly been presented in recent weeks to the parties should be taken seriously.

“Our position is that whatever these European countries suggest through the dialogue must be taken seriously. We will support and we do think – as it has been explained to us –  this proposal will unlock closer engagement and closer integration of Kosovo and potentially Serbia into Euro-Atlantic structures,” he said.

“We have always supported Kosovo’s recognition as an independent sovereign state and we would welcome them in the UN and in any other European structures,” Escobar added.

“I also encourage Serbia, if there is a proposal through the dialogue, they must take it seriously. The details of that is up to negotiators and facilitator. Our encouragement is political support for this process,” he maintained.

Speaking about the Association of Kosovo- Serb Majority Municipalities, a planned autonomous association of municipalities with a Serb-majority population in Kosovo – Escobar said that this would be an important element of the deal.

“I think it’s an existing commitment, I think it is important and I think it should be fulfilled. I talked this morning [on Wednesday] with the President [Vjosa Osmani] about various ways in which Kosovo can shape that to be a win-win, both of the communities in the North and for Kosovo,” Escobar said.

“But the important this is that it has to be under the Constitution of Kosovo and it has to be compliant with the laws of Kosovo and it cannot affect the functionality of Kosovo. But within that, there are many many options, many European models that we can explore together that would make this realistic possibility. So yes, we would like to see it implemented,” he insisted.