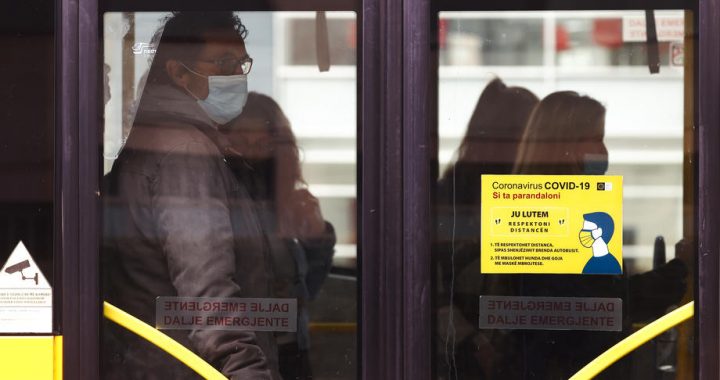 A sign to wear face protective mask and to keep social distance is placed on a bus in Pristina, Kosovo, 05 November 2021. Kosovo 's government imposed a night curfew from 12.00pm to 5am and ordered restaurants and bars to close after 11.00pm to stem the widespread of the SARS-CoV-2 coronavirus which causes the Covid-19 disease. EPA-EFE/VALDRIN XHEMAJ

The government’s tough new measures to prevent the spread of the latest COVID-19 variant have hospitality unions, gym owners and others up in arms.

After 10,578  positive cases of COVID-19 were recorded in Kosovo in the last week, the government on Friday approved tough new restrictive measures to enter into force on Saturday. The new measures remain valid until February 4.

On January 26, Kosovo registered a record number of new cases recorded in one day – 4,397 cases. Since the pandemic in Kosovo began, 194, 710 positive cases of COVID-19 have been recorded. There are currently 28,751 active cases in the country.

After the spike in cases in the third week of January, many schools in Kosovo have switched back to online learning.

The latest measures, meanwhile, restore a curfew lasting from 10pm to 5am. Cafes and restaurants may only operate from 5am to 9pm and music is forbidden after 8.30pm.

Under the same decision, enclosed spaces must not allow more than 50 per cent of the space to be full. Open spaces may be used up to 70 per cent of capacity. The area is calculated as the area where food and drinks are served.

Kosovo’s Chamber of Hospitality and Tourism criticised the restrictions on Facebook as unnecessary. “Hotel and gastronomy have not been and are not a hotbed of infections,” it said by way of response.

It complained that COVID measures have never been fully eased for the hotel and gastronomy industry and that some restrictions have always been present.

The Kosovo Business Alliance agreed, saying in a post on Facebook that the new measures will not stop the virus. “The curfew does not remove the virus; it is more active when there is movement during the day, not when there is no movement at night,” it said in a post.

Hospitality businesses are not the only ones affected. Access to public and international transport without a mask is prohibited, and fitness centres, gyms and other public sports and recreational venues are all closed, with the exception of professional sports clubs.

The private Fivestar Fitness gym criticised the decision to again close gyms. On Facebook, it called the decision scandalous, saying it had always taken maximum care to respect anti-COVID-19 measures.

The Ministry of Health meanwhile requires all who enter Kosovo to prove that they have received all three doses of vaccine. Those with only two doses must present a RT-PCR test done within the last 48 hours.

Citizens who for various reasons have to travel in the region and cross border crossings, as well as those who come to Kosovo for family, business, or study reasons, have also complained about the new measures.

The World Health Organization has warned that travel restrictions have not had much effect in preventing the spread of the pandemic, but instead contribute to economic and social stress. The WHO has called on countries not to require proof of coronavirus vaccination for travelers.

On Monday, the mayor of the Albanian-majority municipality in southern Serbia of Bujanoc/Bujanovac, Nagip Arifi, on Facebook asked Kosovo Prime Minister Albin Kurti to ease the restrictions.

Albanian media outlet ABC News on Friday reported that a large number of passengers were turned back at the Morina border crossing and were not allowed to enter Kosovo due to new rules applied in Kosovo.