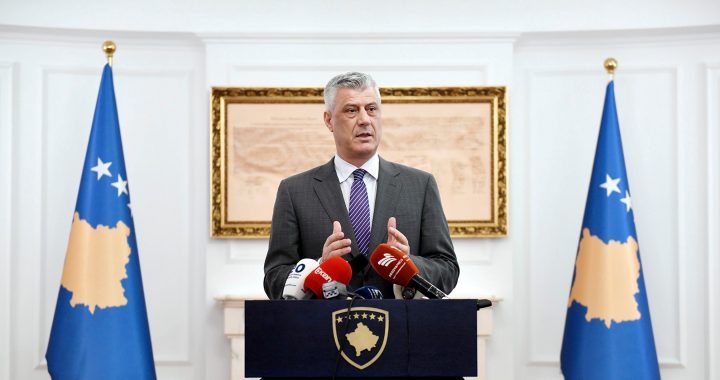 The Office of the President has repudiated plans outlined by acting Prime Minister Albin Kurti to form a negotiation team to represent Kosovo in the EU-facilitated dialogue with Serbia that would be led by Kurti and feature the president.

In Kurti’s letter, sent on April 3 and published on Wednesday, the acting Prime Minister put himself forward to lead talks with Serbia, and outlined the composition of a negotiation team to represent Kosovo in the dialogue, which would include the president.

Kurti stated that his plan was to lead an “inclusive, gender balanced team,” which would also include the Speaker of Assembly Vjosa Osmani and seven representatives of the parties holding seats in the Kosovo Assembly.

However, in a press release on Thursday, the Office of the President stated that President Thaci was not consulted over the idea, and that as the representative of an outgoing government, Kurti was no longer able to make commitments on behalf of Kosovo’s institutions.

The statement went on to question whether Kurti was constitutionally capable of informing foreign diplomats of his intentions to lead the dialogue, after his government was dismissed through a motion of no confidence at the Kosovo Assembly last month.

“The Prime Minister was dismissed by the Assembly of the Republic of Kosovo and is the outgoing Prime Minister of an outgoing government. He is violating the constitutional hierarchy with this approach,” the response of the Office of the President stated, adding that the proposed negotiation team was “nothing more than a personal wish” of Kurti’s.

According to political analyst Blerim Vela, despite the need for coordination between the Government, President and the Assembly of Kosovo, the head of Government has the primary role in foreign affairs.

“The government is decisive for the country’s foreign policy. More specifically, the government defines the entirety of the country’s policies that are subject to the relations of the state of Kosovo with other foreign states and entities,” Vela told Prishtina Insight, adding that Thursday’s statement appeared like something of a power grab.

The EU-facilitated dialogue between Kosovo and Serbia has been suspended since November 2018, following the previous Kosovo Government’s imposition of a 100 per cent tariff on imported goods from Serbia.

However, Thaci and Serbian President Aleksandar Vucic held a private meeting in Washington DC under the auspices of US Special Envoy to the Kosovo-Serbia Dialogue, Richard Grenell, on March 2. Following the meeting, Thaci stated that the US has “a leading role” in the dialogue while criticising EU mediation, describing the EU as “unjust, deceitful and punitive.”

The EU have recently reinforced their commitment to the Kosovo-Serbia dialogue, tasking Lajcak with a “comprehensive normalisation of relations” between the two states.

In his response to Kurti, Lajcak stated that his appointment “signals the EU’s renewed engagement in the dialogue.” The Slovak diplomat added that he intends “to work tirelessly and dynamically to advance the dialogue process” and expects both Prishtina and Belgrade to “renew their commitment with the same determination.”

However, Lajcak’s appointment has been met with scepticism in Kosovo, particularly by Thaci. “I have met Mr Lajcak, and I told him outright that he will not achieve success in Kosovo,” Thaci said at a press conference on March 4.

“All these years he has served as the Slovak Foreign Minister, a country which has not recognised Kosovo. And what is his position towards Kosovo? Neutral? No thank you.”

Vela believes that Thaci’s seeming preference for the US over the EU as a mediator is related to the controversial ‘land swap’ deal mooted as a possible resolution to the dialogue.

“The scepticism of the President towards the EU has increased, as key countries such as Germany and France have spoken out against the possibility that the final agreement between Kosovo and Serbia can be based on changing borders or exchanging territory,” Vela told Prishtina Insight. “As the role of the EU cannot be ignored, these tendencies of the President only damage Kosovo’s position in the negotiation process.”