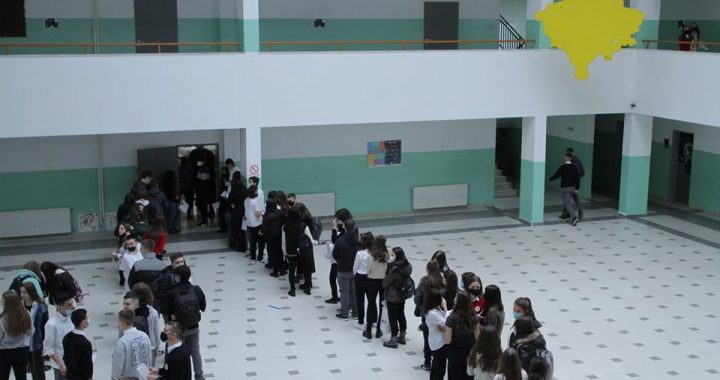 The Ministry of Health sent a mobile team to vaccinate pupils of the ‘Xhevdet Doda’ school in Prishtina, to encourage more youngsters to get jabs.

Dozens of students from the Xhevdet Doda high school in Prishtina waited in line on Wednesday to receive vaccines against COVID-19 after the Ministry of Health dispatched a mobile medical team.

Deputy Health Minister Dafina Gexha-Bunjaku said the government had provided safe vaccines, and school children also needed to get them.

“It can be seen that in this school there is a great interest among pupils for vaccination. We call on everyone to get vaccinated as much as possible, especially children, because that is how we will keep schools open,” she said.

She added that her own 15-year-old daughter had been vaccinated that day, and was feeling fine.

The principal of the Xhevdet Doda gymnasium, Azem Jaha, said that the students were vaccinated with the approval of their parents.

“It is very important that students get the vaccine. “The number of students interested in vaccination is large, while there is little reluctance on the part of younger students,” he said.

The Ministry of Health has announced that the vaccination process in Kosovo using mobile teams in schools and at other levels will continue in cooperation with the Ministry of Education and the Municipal Directorates of Education.

The ministry has called on all those who have not yet had or completed vaccination, with both doses, to do so.

Since the campaign started, over 1.5 million doses of vaccine have been issued to all towns and cities of Kosovo. According to official data, over 700,000 citizens of Kosovo have had a first and second dose.

Last week, the Ministry of Health appointed teams to vaccinate citizens at mosques during or after Friday prayers.

Getting a vaccine in Kosovo is permissible to anyone over the age of 12, and can now be done without having an appointment.