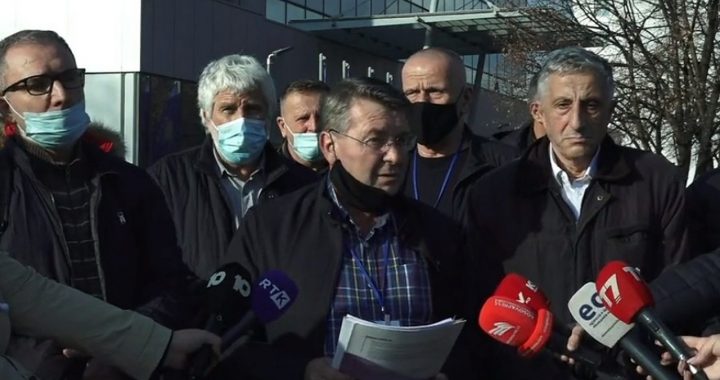 Unions are getting angry over delays to the approval of a draft law on public sector salaries – which was supposed to be approved in October but still has to rewritten in line with a Constitutional Court ruling.

Kosovo’s Federations of Health Unions, FSSHK, held a strike on Thursday, at a time when the government of Albin Kurti is coming under almost constant pressure from other unions and their protests.

Health workers at the main University Clinical Center of Kosovo, UCCK, in the capital, Pristina, and in all seven regional hospitals in the country, stopped providing services from 7am to 3pm on Thursday, demanding urgent approval of the draft Law on public sector pay.

They want the approval of this draft law and its immediate implementation within the 2022 state budget.

Blerim Syla, head of the health unions, told BIRN that his members “will hold all-day strikes, everyday, if they do not fulfil our requests by next Thursday”.

The FSSHK also claimed it will sue the Minister of Finance, Hekuran Murati, over his Facebook post claiming the federation had received 3 million euros in the last five years – with no track of what the money was used for.

“In the last five years, FSSHK has received over 3 million euros in the name of contributions that were deducted from the salaries of health personnel and transferred to the FSSHK. I doubt health personnel have ever been notified of where this money has gone,” Murati posted.

Another protest demanding implementation of the stalled Law on salaries was announced for Friday by the Independent Union of Kosovo Administration workers, SPAK.

SPAK on Tuesday claimed the government had ignored: “The Law on salaries; the budgeting of resources for the implementation of the Law on salaries in the 2022 budget; general collective agreements; health insurance; recognition of the work of all public officials who were wrongfully and violently fired during the 1990s; setting minimum salaries”.

The United Union of Education, Science and Culture, SBASHK, meanwhile announced a protest for December 4, also over the Law on salaries.

The updated law was due to be sent for approval in parliament in late October, but is still in the process of being changed, based on the 2020 Constitutional Court ruling.

Prime Minister Kurti told the media in late October it wasn’t that simple and pay rises had to be matched by rises in productivity. “In their electoral promises, they (former governments) tried to increase salaries, but the economy does not work that way. With us, in the coming months and years, an increase in salaries will follow an increase of productivity.”

The law on wages is part of a public administration reform backed by the EU. The head of the EU office for Kosovo told BIRN in July that if Kosovo does not finalize the reform, it risks losing EU assistance of up to 10 million euros.